I apologize upfront for this post. I'm in a mood tonight.

One specific UX sin interrupts my workflow and annoys me more than anything else on macOS.

Applications that quit when you close their primary window.

I want to call out a few of those apps now before offering my dumb solution.

The first is TweetDeck. And I get it. I know it's some horrible desktop + web app amalgamation, and I should be thrilled a large company is even acknowledging that desktop computers exist. On the other hand, honestly, it's pretty good at what it does. I'm mostly OK with it being a web app since it's just a wrapper around a website that is itself a wrapper around a web API. Fair enough.

But why? Why did that product team decide it was OK just to quit the entire app if you ⌘W or otherwise close the window?

Once the app is gone, you stop receiving notifications, which seems the app's point, no? And then when you do relaunch it, you're hit with the loading delay while the UI hydrates all over again. (Yes, it's a web app. That's how these things work.)

I guess I'm just baffled why you would obviously put some amount of care and attention into even making a desktop app wrapper available if you're not going to go one or two steps further to make it fit the platform more naturally. 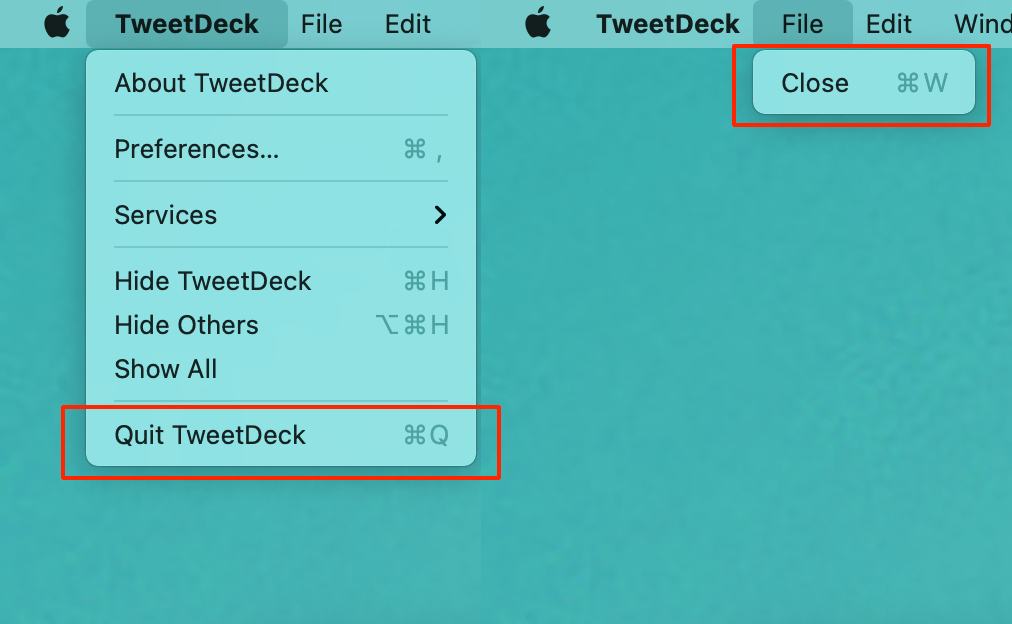 Why even have that neutered File menu with a redundant menu item at all? (I know why.)

While I'm at it, what's that extra Close menu item doing in the Window menu? Or the native macOS Tab Bar that doesn't work but can still be shown? 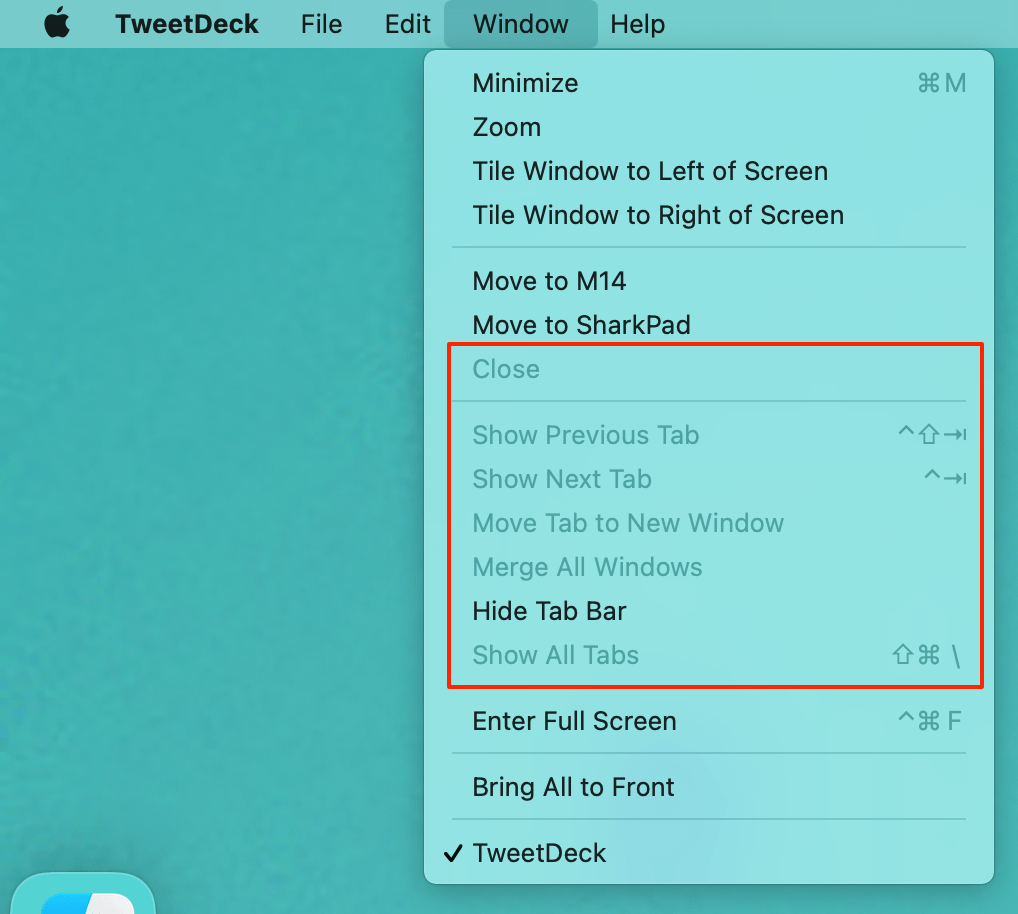 I expect better from companies with so many resources. Even if we are talking about a side-project (and pretending the really nice native Mac app they killed never existed).

So that's what grinds my gears this evening. Apps that quit when you close their windows. Scanning my /Applications folder, we can add these offenders to the list:

Maybe I'm just an ornery old man yelling at the new kids running through my lawn. Maybe I should be content to retrain myself to hit ⌘H instead of ⌘W when I no longer want to see a non-document-based app but want to keep it running.

Maybe Apple has done the research and realized that a decade-plus of relearning computers with iOS had taught the over-60 crowd that fullscreen apps are the be-all-end-all. And Gen-Z, who grew up with touch screens, intuits that as well. Maybe there are diminishing numbers of us in the middle reluctantly dragging overlapping windows around like cave people?

But my (least?) favorite. The most hysterically bad example that I want to point out is Microsoft Teams.

(OK, funny sidebar. You know they're pushing this app down customers' throats when what you think would be the Teams website at

Of course, Teams is Electron-based. So, of course, it comes with all the caveats and compromises that Electron brings. OK, fine.

I want to drag this app because I truly have so much respect for Microsoft software historically. The Office suite is just a mind-blowing multi-decade achievement in my mind. And in recent years, getting all that business logic ported competently to iOS and the web is astounding. The backward compatibility that Windows is forced to maintain while somehow moving forward is inspiring. And while using Visual Studio Code makes me want to gouge my eyes out and write novels in a log cabin far off the grid, I really do respect what they've built.

So please, compare what Microsoft can do against Teams.

For so many reasons, it is a nightmare of awfulness that should make my workday better but really only gets in the way. And here is the most glaring fault that convinces me no one who cares or knows better is really using the app as customers do. (Or is empowered to make a difference.)

OK, first of all. Teams does have the courtesy of not quitting when the window is closed. But rather than reopening the only window where you last placed it or even reopening it to some sane default size and position, it reopens in…full screen.

Not macOS Full Screen that takes over the entire screen - Dock, menu bar, and all. But maximized. What people used to call full screen. Just, boom. Hello. Taking up every pixel of available space.

I would normally share a screen recording of this happening, but everything in Teams is work-related, and I don't want to start spreading company secrets. (And blurring out an entire window would be silly.)

So, please. Microsoft. Do better. I know you can.

And for all the other big companies out there. Please start caring again. When you take care out of the work, wrapping your web app into a desktop app is no better an idea than ticking a box and thinking your iOS app will make a good Mac app.

Anyway, here’s my fix. And, once again, Keyboard Maestro to the rescue.

I have a special macro group called Stupid Fucking Misbehaving Apps that only applies to a select group of software. And in that group, a single macro titled Hide Because ⌘W Doesn't Fucking Work The Way It Should.

All it does is override ⌘W to hide the app instead of whatever broken behavior it would normally do. 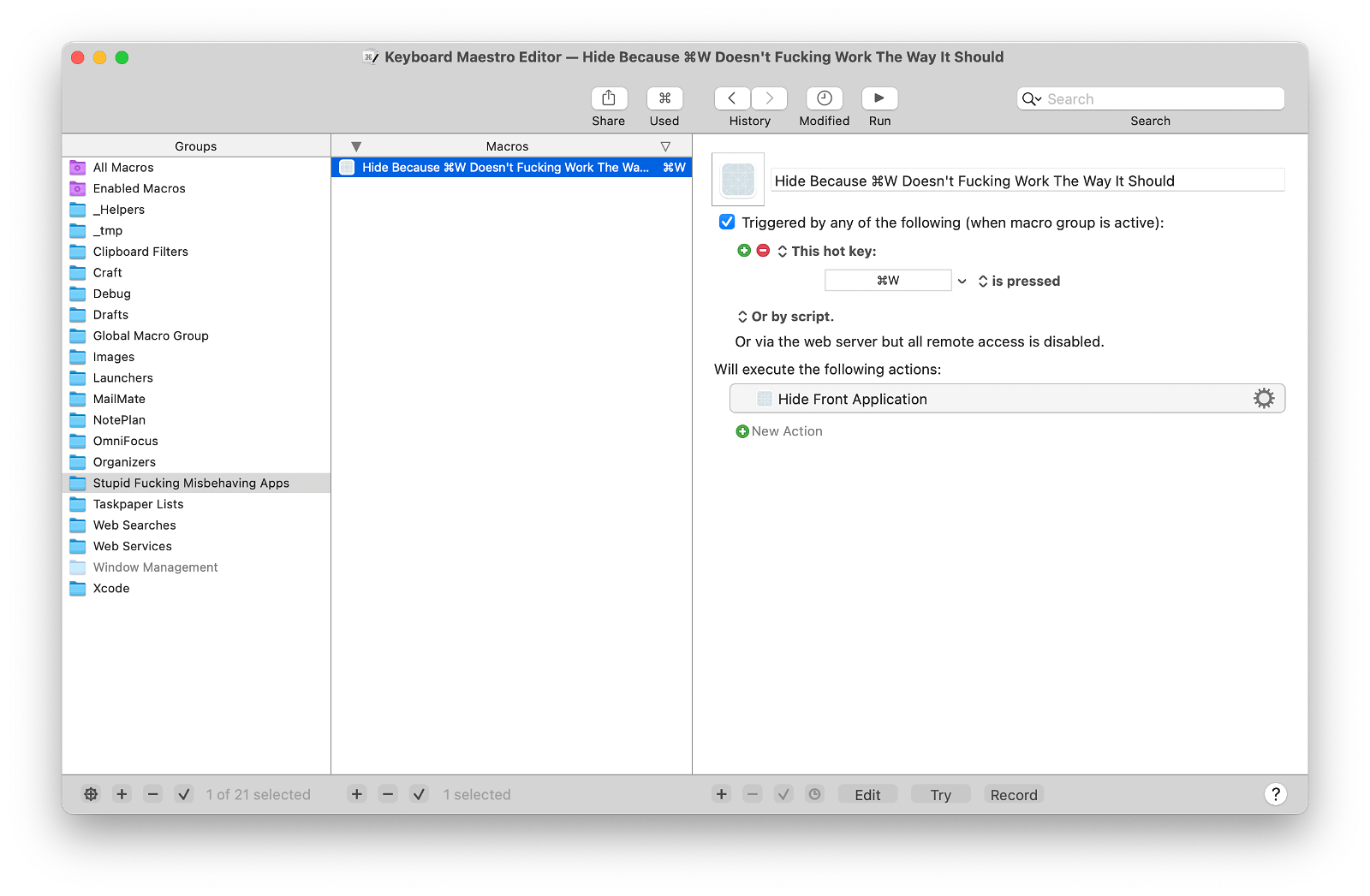 I should have thought of this years ago.