The timing of this post is entirely accidental, but it arrives almost one year to the day since the last time I wrote about work meetings. And the reason I’m writing about this topic today is that I’ve been so swamped with work meetings the past few months, I’ve neglected to write anything here. I finally decided there’s no better way to get back on the horse and force out a blog post than write about what’s top of mind.

So this is about how my note-taking workflow for meetings has evolved since last year.

As I said last May, I take detailed meeting notes that are almost entirely for my benefit. They serve as a fantastic reference source but are also an insurance policy to cover my ass. I don’t mean that negatively about my workplace. Just that we move so quickly with so many different parties involved, I find having a definitive archive of conversations and decisions is invaluable to keep people (including myself) honest and projects on track.

My old workflow of automatically creating a new note for each meeting in Drafts using a standard template worked great - and still does.

For a long time.

With video meetings being the new norm, I found myself grabbing screenshots of the meeting window to capture shared slides, documents we were collaborating on, and the latest screens the design team was showing off.

So now, in addition to my detailed text notes, I found myself compiling a visual archive of my team’s communication as designs changed and evolved - as Gantt charts shifted over time.

But where the hell do I store all this stuff? And how do I keep it correlated to the notes I was taking?

I tried lots of solutions. My primary requirement was to keep my notes in as much of a plain text format as possible - mostly because I don’t ever want to find myself locked into an app or ecosystem I can’t leave.

For the most part, Ulysses worked pretty OK. I could take notes and drag and drop screenshots (or other attachments) into the editor and feel good that it was storing everything as future-proof .textbundle files under the hood. But for reasons I don’t want to bore you with (because Ulysses really is a fantastic app - I’m typing this in it now), I wanted something better for accumulating reference material more than a pleasant writing environment.

It turns out, a great solution was hiding in plain sight. DEVONthink.

I’ve used DEVONthink for over a decade to archive documents (primarily PDFs), ebooks, and other long-term storage material. All the stuff that would be in a fire safe. It has incredible search capabilities that always help me find exactly the document I need. It just never occurred to me that power could be applied to my meeting notes as well.

So how am I getting my meeting notes into DEVONthink, how do they remain future-proof, and how am I also keeping those notes tied together with my newfound love of screenshotting video meetings, too?

First off, I did have to make one significant compromise (sort of). As you’ll see, my meeting notes still start as Markdown in Drafts but get converted into .rtf. Is that what I want? Meeehhhh, no. But I can live with it. There are enough tools (most of them scriptable) if I ever need to do a mass-exodus from .rtf back to plain text. Worst case, I could go RTF → HTML → Markdown or something awful like that.

Anyway, the benefits I’ve discovered with this workflow have so far outweighed my long-standing grumpy-old-man-get-off-my-lawn attitude when it comes to Plain Text All The Things™️.

Like last year, I have an iOS shortcut I run each morning that loops through my work calendar and creates a new note in Drafts for each event using a standard template.

Each empty note is tagged with meeting in Drafts to keep them hidden from cluttering up my day-to-day notes using a workspace filter.

Whenever a meeting starts, I switch to my Meetings workspace in Drafts, which shows all of my notes for the day. I select the appropriate note and type away.

If I need to screenshot anything during the meeting, I just ⇧⌘4, and drag the little floating capture preview into a folder on my Desktop where I keep any pictures or other attachments for that meeting.

Much like cleaning up your Inbox at the end of the day, I reserve 15 minutes before I shut down to process the notes I took that day.

I send all of my meeting notes from Drafts into DEVONthink using a “Send to DEVONthink” action that imports them to the app as Markdown (not plain text). 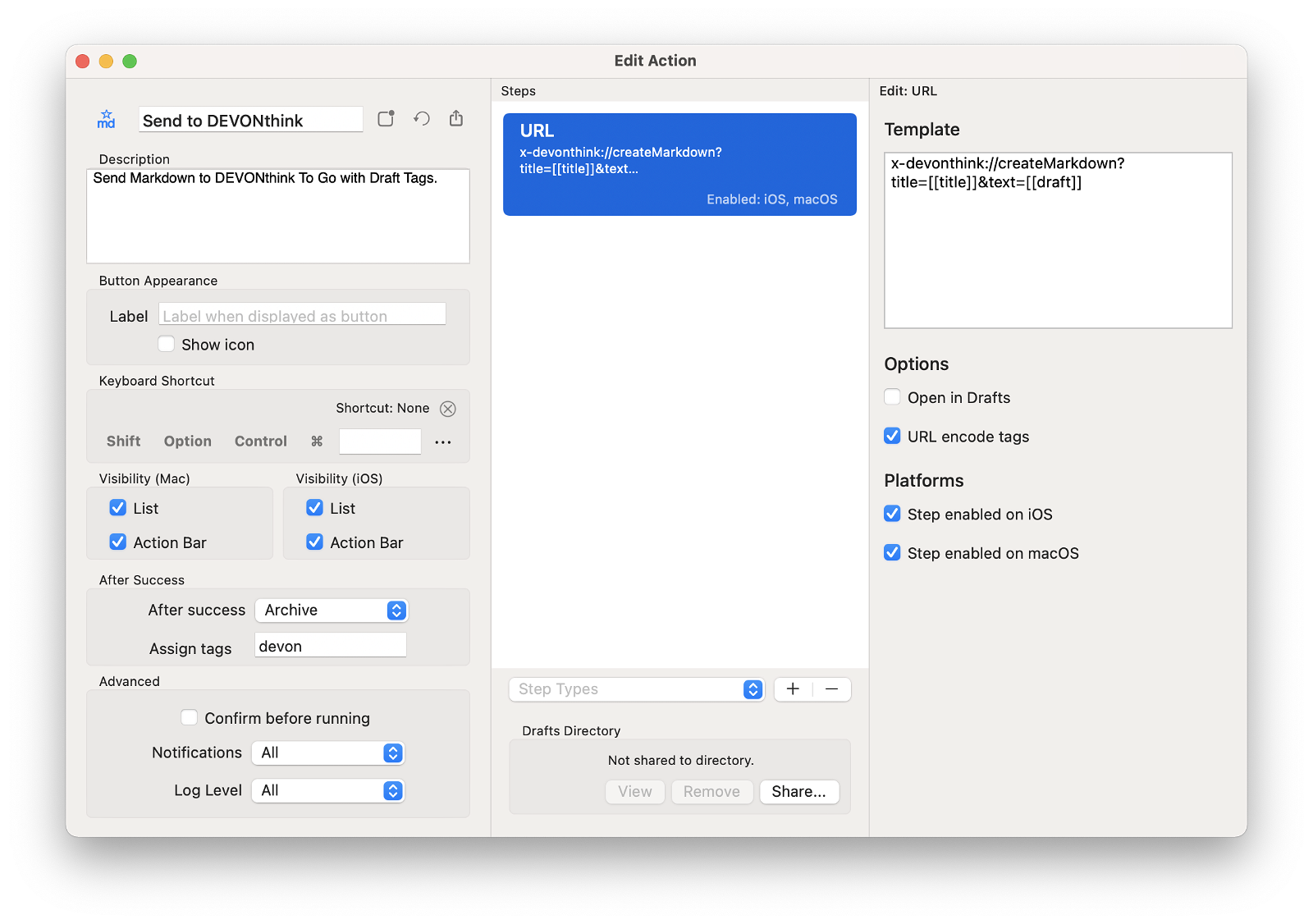 This drops them into my database’s Inbox. I have a Smart Rule in DEVONthink that automatically converts any new Markdown files into rtf. 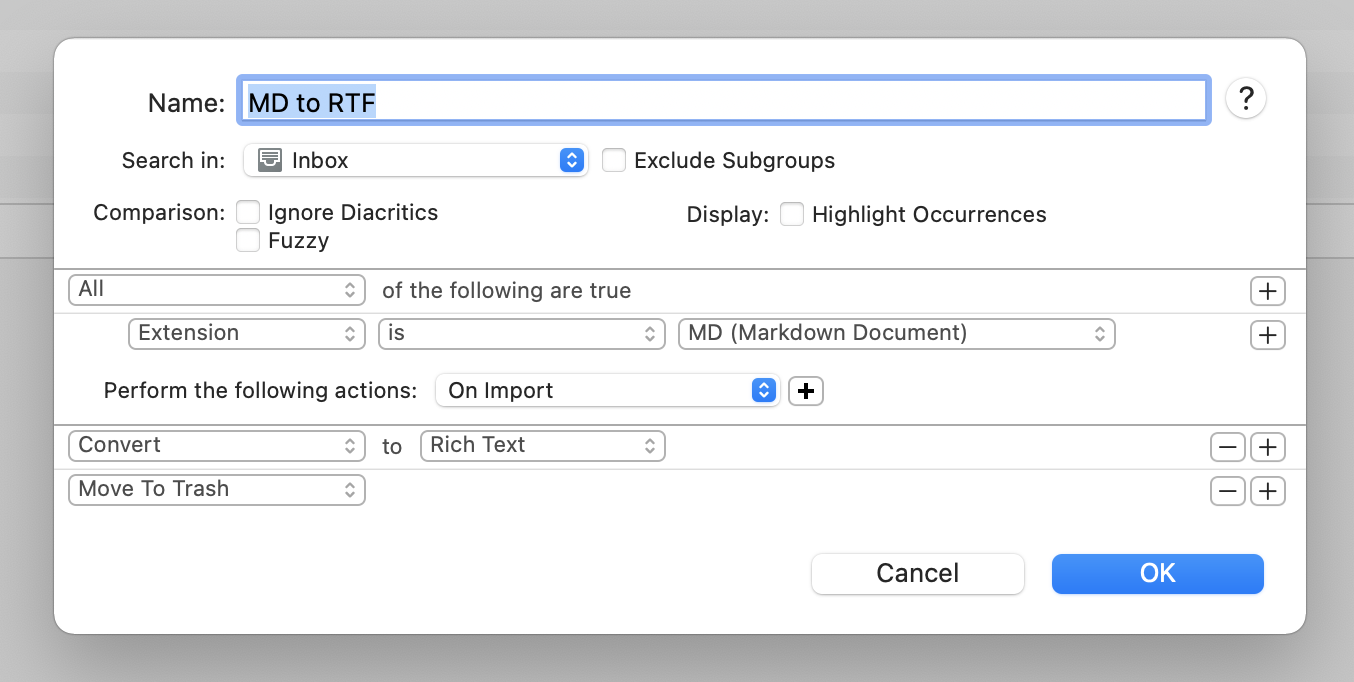 This trashes the original Markdown file and leaves a formatted rich text document in its place.

If a meeting note has no files associated with it, I file it away into the folders I use for meeting notes. (I keep them sorted into year/month folders.) 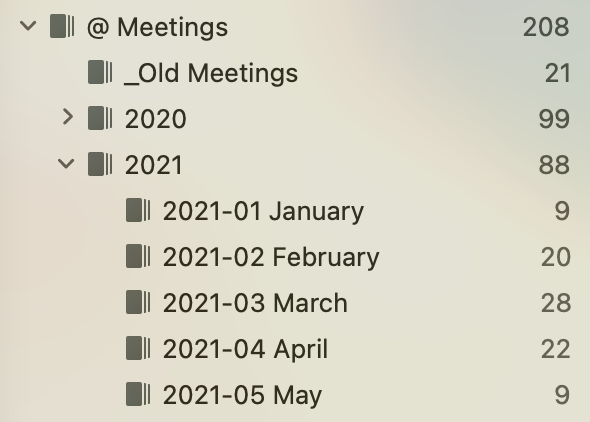 But, if a note does have attachments, that’s when the nerdy fun starts.

In DEVONthink, I select the note and run the Group Items command. This moves the note into a new folder by itself.

Next, I drag the attachments (mostly screenshots) from the meeting folder on my Desktop into that DEVONthink group.

As you’re going to see, I want these attachments ordered chronologically - especially if they’re screenshots - as I captured them. That way, they make sense when I review them in my notes, and they’re not out of order.

What I need to do is sort them by date created rather than filename. As I wrote about last year, I don’t trust file timestamps. It’s too easy to mess those up. I prefer to always sort by filename. So…

I built a tiny little Mac app to handle this next step. I’m sure it could be done with a shell script or some other type of macro, but this was just faster and is super convenient to run.

All I do is drag and drop my folder of note attachments onto this app’s Dock icon, and it renames each file by adding a numeric prefix to make sure they stay sorted by date.

It starts naming at 000 and counts up to 001, 002, etc., leaving the original filename in-tact after the numeric prefix.

Boom. Now the files will remain sorted chronologically even if I mess up their timestamps, moving them around in the future.

Here’s the entirety of that little Mac app: 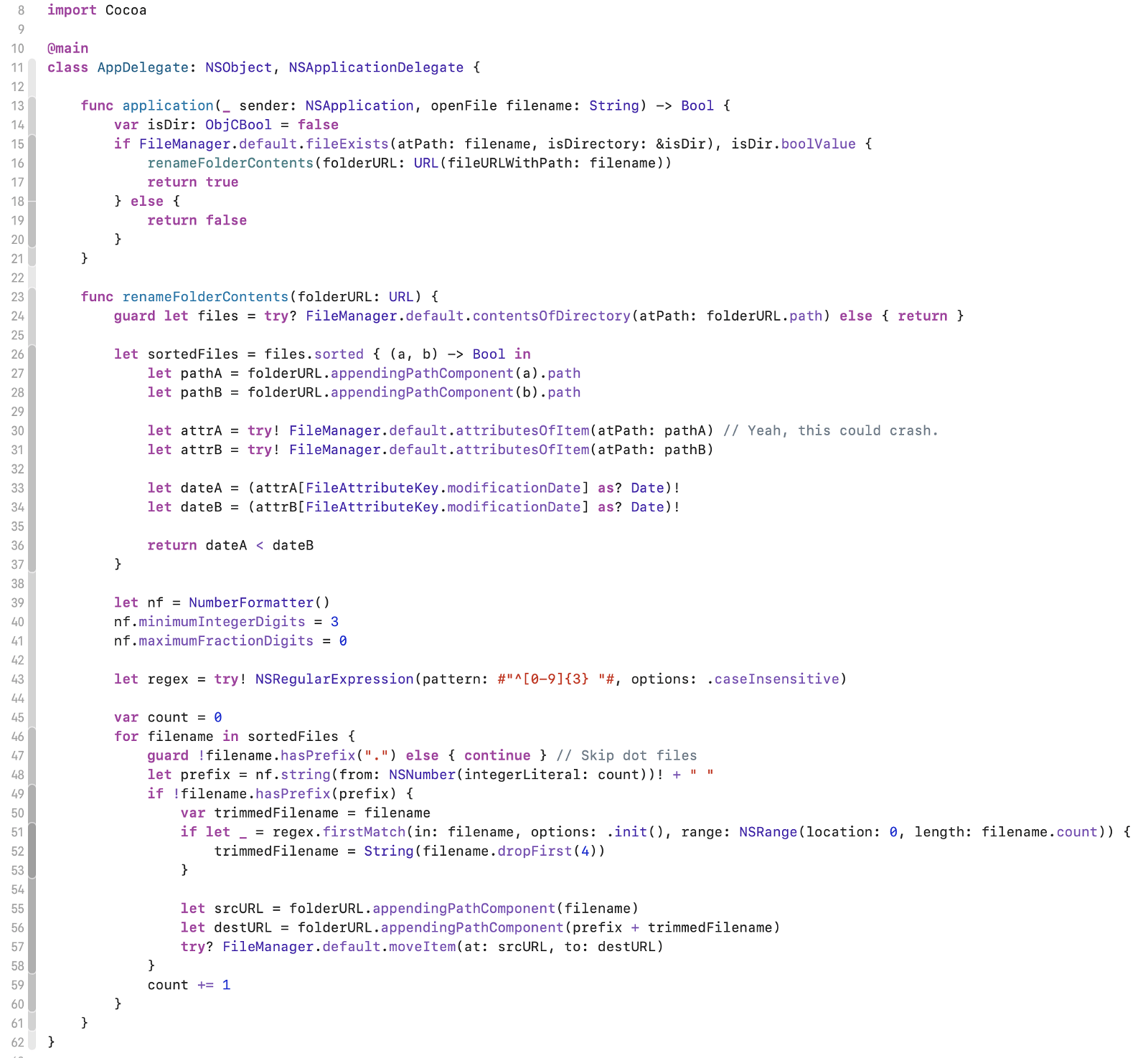 Then I drag them into the folder in DEVONthink with the note.

But here’s the real magic of this whole system. The part that makes it so powerful.

So many of the screenshots I take are presentations, slides, and other documents people are screen sharing. With DEVONthink’s full-text search capabilities, when I’m trying to find an old meeting note months from now, it would be fantastic if I could search inside those screenshots.

With DEVONthink, I can.

Let me explain what I just did.

What’s the point of doing this?

A year from now, when I’m trying to find my notes about a long-ago meeting, I can surface that reference material by searching for text that someone else was presenting on screen in addition to anything I wrote down myself.

Having this capability feels like a secret weapon or a cheat code for finding material that other people talked about beyond my personal meeting notes.

Like I said above, moving away from having all of my notes in plain text made me feel uneasy at first. But I’m confident enough in .rtf and my ability to get my data back out if I ever need to that I got past my obsessive hangups once I realized just how damn useful it is having all of my historical reference material accessible in the future.