You either die a programmer, or you live long enough to see yourself build a text editor.
—Harvey Dent (or someone)

Two weeks ago, I released TextBuddy - a new text editor for macOS. And now I'm finally getting around to sharing why I built it.

It started as an "ugh, I wish I had a small little app that did this" thought going through my head. And followed soon by "Ok, I can make that really quick."

Sure enough, I had something passable by lunch. But then my dumb brain was like, "Hey, it sure would be great if it also did this...Oh, and this, too...And that!"

As I explained to a friend in an email: 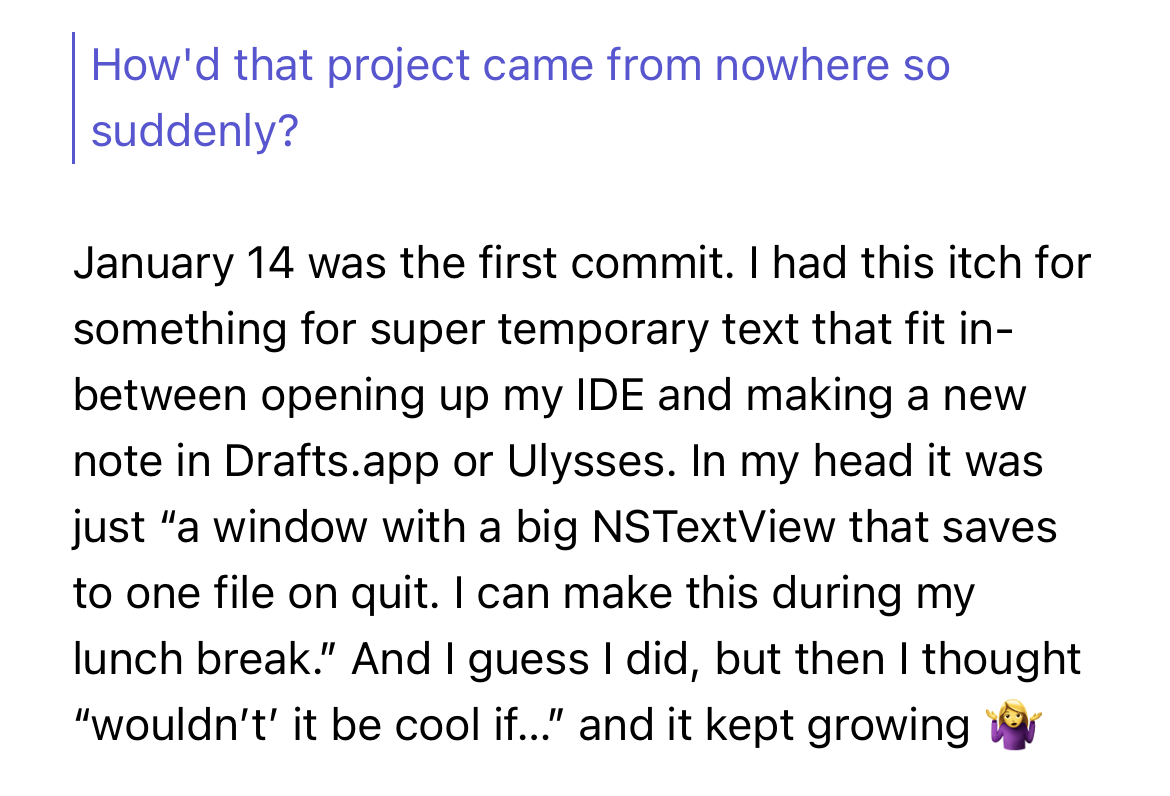 Programmers know all too well where that line of thinking ends. (Hint: madness) In my case, it ends with this blog post announcing TextBuddy.

I typically bounce around between three text editors throughout the day.

Ulysses is where I keep meeting notes and draft long-form writing since it excels in being a very comfortable writing environment, handles Markdown well, and supports file attachments. (I'm writing this post in it right now.)

Drafts is where I jot down quick notes, ideas, and triage ad-hoc to-do lists. While some of my drafts grow larger and graduate to Ulysses, most of the stuff I capture might be considered "throw-away" by other people. Still, to me, Drafts has become this massive, chronological archive of all the ideas I've had every day over the last decade or so. Computers are powerful, storage is cheap, and having that corpus of my historical train of thought is a powerful weapon for knowledge workers.

And then, of course, there's TextMate. Which, for sixteen years, has been my go-to editor for manipulating text.

But now and then, I've felt a need for something to drop truly temporary text into — a staging ground to do a few quick edits before taking that text elsewhere. There's mental overhead to using those other three apps.

Ulysses, while incredibly powerful, is slow and cumbersome to move around. TextMate, being a document editor, requires thinking about files. Making a new one, and then choosing where to save the file or discard my changes. Drafts solves the problem of thinking in files, and I know it's a fine line, but there's an obvious (to me) category of "stuff" that I don't want polluting my Drafts library, which means I need to think about deleting any temporary drafts I create.

I fully realize the above must sound insane to a lot of people. But going back to the old Getting Things Done philosophy of "mind like water," the fewer decisions I have to make about unrelated tasks while focusing on my work, the better job I can do at the stuff that matters.

So, I found myself in need of a middle ground app between Drafts and TextMate.

TextBuddy is what I came up with.

What started on January 14th as a single text field in a window that automatically saved what you typed kept growing.

The app now offers over 130 nerdy, plain-text commands you can run with a keystroke or two. From Unix-y shell script type stuff to common tasks programmers use daily to crazy workflows like capturing text from screenshots and images and even transcribing spoken words from audio and video files. (All done locally. Nothing sent over the network.)

And it syncs over iCloud, too.

I'm also excited to say that, over the last two weeks, TextBuddy has become the most well-received app I've ever built.

VirtualHostX is my main app. It's the cornerstone of my little software company, and over fourteen years has been a large (and small) source of my income.

And, yet, TextBuddy has already had more downloads in thirteen days than VHX had in all of 2020.

I don't say that to announce my retirement to a tropical island (I prefer the mountains anyway), but to say that it feels amazing to find out I'm not crazy. To learn that there are lots of other nerdy people out there like me who find use in an app that I originally built just for myself.

I tried it out for 5 minutes and immediately purchased.

I could probably go on for ten-thousand words about all the random ways I find TextBuddy helpful throughout the day. But if you're interested in hearing that, go check out the website.

Instead, I'll leave you with this 42-second intro of a typical text editing session with TextBuddy. And then a couple of videos of what I think are some fun features.

TextBuddy requires Big Sur and is free to download and use. Like my other app, Ears, you can optionally support TextBuddy at one of three tiers to remove the nag screen at startup.

Any feedback you have is very much welcome. Oh, there's also a #textbuddy channel on my Discord server if you'd like to say hello in real-time.