A few weeks ago, I started working on a new Mac app called Minion. It's nothing too big or complicated - just a quick project that I hope will be useful to Mac power users. My goal was to build the app and the accompanying web service in under six weeks. With two weeks until my self-imposed deadline, I'm well on my way to completing it. The app is built. Now, it's just a matter of finishing the web service and the marketing website.

One thing that's giving me pause, however, is how to price the app. The web service, while not required, is an integral part of the app. The app is definitely more useful with it included. And with that in mind, there are three ways I could go about pricing the two components.

A fourth option you might wonder about is not charging for the web service at all. That's something I briefly considered, as the servers it will be running on don't really cost me that much. However, a core feature of the service is its ability to send text messages to your phone. If I only charged an up-front fee for the app, a heavy user of the web service could eat away the money they paid for the app as sending text messages cost real money. Three-quarters of a cent per message to be exact. A user who sent three messages a day, which is not out of the question, would cost me ten dollars a year. At that rate, they'd eat through the cost of the app within a year or two or three.

With that said, I definitely have to charge for the web service to some extent. The question becomes, do I do so with the intention of making a profit or just breaking even?

Right now I'm leaning towards the profit option. My other app, VirtualHostX, has an accompanying web service called Lift Off which I charge for. The main goal of Lift Off is to make VirtualHostX a more compelling product. However, recurring revenue, even a small amount, is nice to have. And Lift Off falls squarely into the small-but-nice-to-have range. Originally, Lift Off cost users ten dollars a month. But, after consolidating some web servers and finding a cheaper source of bandwidth, I was able to drop that price to only three bucks. And that's my concern with pricing Minion's web service. I can always lower the price to benefit users and encourage growth, but raising it after the fact is a much thornier issue.

A third pricing option would be to just charge a single subscription fee for the app in general. I like that idea, but after asking around and talking to friends, we all agree that a subscription-based desktop app is a hard pill for users to swallow. There just aren't any successful examples to point to.

What I think I'll ultimately do is sell the app for a fixed price, slightly higher than I might otherwise price it. But include a free year's worth of service in the cost. That covers my financial bases and also forces all users to become familiar with the benefits of the web service - hopefully increasing my conversion rate when it comes time to renew subscriptions the next year.

That leads me to my last pricing question. What do I charge?

I remember my eighth grade algebra teacher introducing us to quadratic equations by drawing a parabola on the board. The y-axis charted total profit and the x-axis was the cost of the app. If you charge a small fee for your product, lots of users will buy it, but you won't make much money. If you charge a lot for your product, you'll make more per sale but have less sales overall. The trick is to find a happy medium when enough users buy your product at a high enough price as to maximize your profit.

Since releasing VirtualHostX in 2007, I've played that pricing game. Originally, the app sold for a paltry seven dollars. But over time as it became more popular and gained more features, I raised the price. I remember raising the price from $7 to $12, and then $14, and then finally after two years to $19. At that time I was completely floored that people were still buying the app and thought there was no way I could ever charge more. I had reached my limit. But, here we are, seven years later and VirtualHostX is still making money at $49. Have I found that magic maximum point on the y-axis? Maybe. Take a look at the chart below. 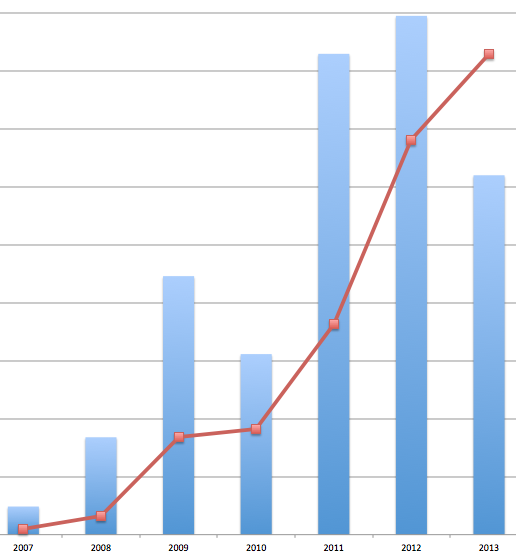 On that chart, the blue bars show the number of new customers I gained each year. The red line is my annual revenue. As you can see, new users and revenue went up, together, every year until 2013. In 2013 I raised the price of VirtualHostX from $34 to $49. You can see that my number of new users went down, yet revenue continued to increase. That signals to me that I've found a happy price point. (That said, I've forgotten most of my statistics and have no marketing training, so it's totally possible I'm reading this the wrong way. If you're a professional at this, feel free to correct me.)

My challenge with pricing Minion is that I'm entering an empty market. I've searched around and haven't found any other app that does what Minion does, so I have no competition to price against. My only frame of reference is my intuition and the general price point of other Mac desktop apps in the "utility / pro user" category. My gut says that should land me in the $19 - $24 range. Add to that the cost of the web service - $10 - $20 a year - along with a one-time price break, and I'm thinking I'll price minion at $29, with a year of the web service included.

Anyway, those are my thoughts. I wanted to write them down for my own benefit so I could concretely walk through them. And maybe some of you out there have wondered what goes into pricing an app.