Apple asked for feedback from developers today in an email survey. I try to keep this blog positive and restrict most of my snark to Twitter, but I figured I might as well post it here, too. 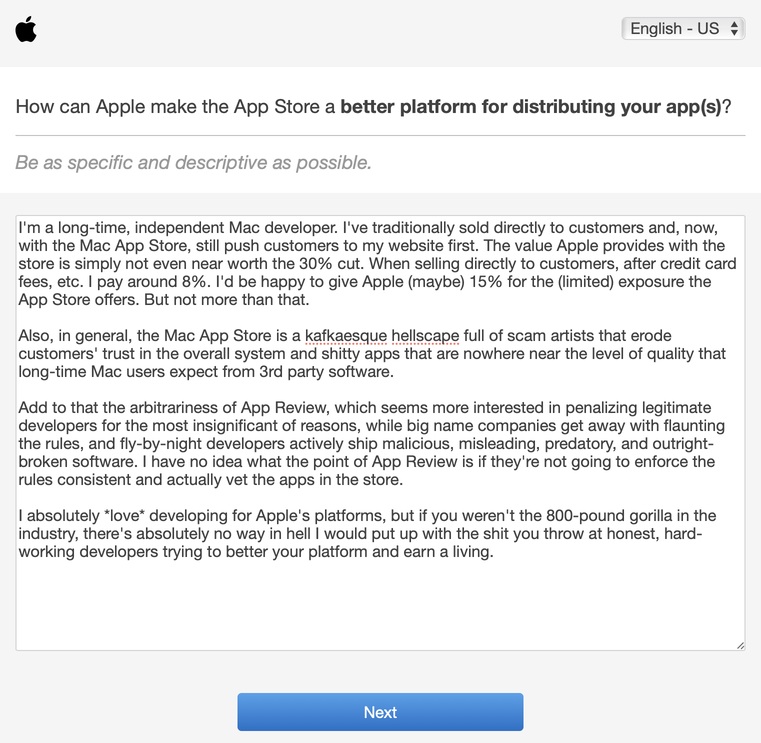 If you can't see that image for some reason, here's what I wrote:

I'm a long-time, independent Mac developer. I've traditionally sold directly to customers and, now, with the Mac App Store, still push customers to my website first. The value Apple provides with the store is simply not even near worth the 30% cut. When selling directly to customers, after credit card fees, etc. I pay around 8%. I'd be happy to give Apple (maybe) 15% for the (limited) exposure the App Store offers. But not more than that.

Also, in general, the Mac App Store is a kafkaesque hellscape full of scam artists that erode customers' trust in the overall system and shitty apps that are nowhere near the level of quality that long-time Mac users expect from 3rd party software.

Add to that the arbitrariness of App Review, which seems more interested in penalizing legitimate developers for the most insignificant of reasons, while big name companies get away with flaunting the rules, and fly-by-night developers actively ship malicious, misleading, predatory, and outright-broken software. I have no idea what the point of App Review is if they're not going to enforce the rules consistently and actually vet the apps in the store.

I absolutely love developing for Apple's platforms, but if you weren't the 800-pound gorilla in the industry, there's absolutely no way in hell I would put up with the shit you throw at honest, hard-working developers trying to better your platform and earn a living.