If you've been following along at home, you might remember that I started building a Mac app for managing my personal finances last April. Think of it as a powerful, privacy-focused, native alternative to Mint.com. Quicken, but not awful.

Since then, I've helped shipped a huge redesign to the app at my 9-5 job as well as two major updates to VirtualHostX and CommandQ. Complicating matters, VHX Pro is my first product ever to use a subscription pricing model. So, in addition to all the dev work that went into the app itself, I also had to write the server infrastructure to handle recurring billing, etc. I've been busy.

Nonetheless, I continued tinkering with my finance app all year. It's basically my white whale at this point. And I'm happy to say it's reached a point where I rarely if ever log into my bank's website. Everything is done through my app.

But it's not nearly ready yet. The UI and feature set is still too much in flux. However, while experimenting with different ways of managing and forecasting a budget within the app, I decided to prototype a few ideas as small, standalone Mac apps so I could build and test them in isolation. One of them took hold and became incredibly useful to me in real life as my wife and I made adjustments to our finances and tried to repair the damage from 2018.

I shared the app with a few friends and received some encouraging feedback. And then last month, with the end of the decade just a few weeks away, Twitter blew up with people posting about how they spent the 2010s and what they accomplished. I sure had a hell of a decade. But I wasn't in the mood for reminiscing. I wanted to look ahead. So, I got the idea to put something new out into the world on January 1st and turned to my little budgeting app as it was the closest thing I had ready to go.

And here it is. 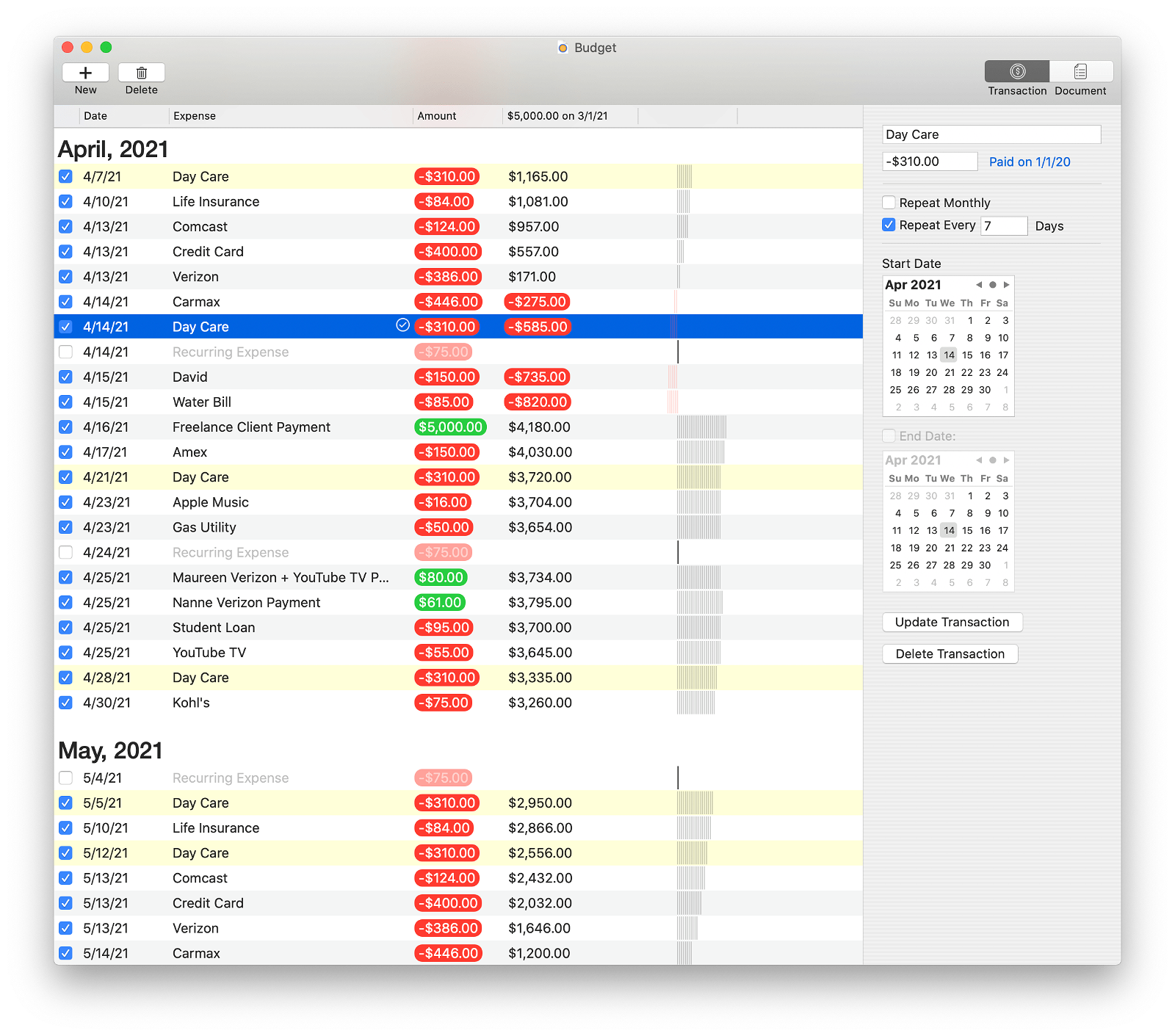 It's called Rebudget, and it's a wonderfully simple way to visualize your personal budget over time. See the natural ebb and flow of your account balance as paychecks arrive, recurring bills go out, and unexpected expenses arise.

The app isn't meant to be an identical mirror of your bank statement. (That's what my other, larger finance app is for.) Rebudget is a tool for planning and forecasting. Use it to see if your money is heading in the right direction. Use it to see if you can afford to take on a new car payment this Summer or if you should wait till next year. Figure out if you need to ask your new freelance client for a 50% deposit up-front or if you have enough cushion to wait for a final payment when the project is finished.

And that's kind of the idea. If you're already financially secure and never stress about your bank account, great. Rebudget isn't for you. But if you freelance for a living or have other income that doesn't arrive on a strict once or twice a month schedule - or if you're recovering from a financially disastrous year where it seemed like everything was spiraling out of control, I think Rebudget can be a great way to plan or at least sanity check your finances. It's certainly helped me in recent months.

I built the app to work the way I think. And that meant focusing on flexibility. I like to work with and visualize different scenarios at once. So rather than making Rebudget a typical shoebox Mac app with a canonical datasource, I went with our good friend NSDocument. That means you can have as many budgets as you want. Open them up side-by-side in different windows and compare how certain financial decisions effect things eighteen months from now. Or, quickly toggle a recurring bill on or off to see if it's worth cutting that expense.

I have an early iOS version in the works, but until then I still wanted a way to have my data somewhat available on the go. So, I added an option to sync your bills and their due dates with Reminders.app. That way your bills show up on your calendar and you get alerts when they're due. Also, if you check off a bill in Reminders, Rebudget sees the change and marks that bill as paid in its own database.

That's Rebudget. I wanted to put a brand new thing out into the world to begin the new decade, and that's what I came up with. I find it useful. I hope you enjoy the app, too.