One of my goals for 2020 is figuring out a financial path forward for my little software business - particularly around how I price and sell my apps.

I've been mostly open about the fact that, for a few years, I was incredibly fortunate enough that my software business was successful enough to be my full-time job. I've also been pretty honest that sales started slipping in 2017 before cratering in 2018. The reasons for the decline are varied - some my fault, others outside of my control.

But this post is about figuring out what can work in the years ahead. And the genesis of that experiment began last July when I started planning in earnest and setting up the infrastructure to convert my main app to a subscription model.

I flipped that switch one year ago last week, and then a year ago next week, I wrote a post titled Subscriptions or Bust. It put forth my (the industry's) argument / assumption that Apple has left most apps with no choice except for subscriptions.

I put this to the test with the launch of VirtualHostX Pro using a "Sketch" model. (Michael Tsai was kind enough to call my approach "reasonable.") And while I did (do) think it's the way forward, I wanted to use 2020 to experiment with other pricing models with smaller apps that wouldn't risk destroying my income if I made a dumb business decision.

Well, VirtualHostX is now 13 years old. It's had a fantastic run. I hope I have one more rabbit to pull out of a hat regarding VHX and maintain support into this new, exciting chapter of macOS, but the writing with Apple Silicon is on the wall.

For nearly a decade, I've had another project in mind that I was always too scared to attempt building - mostly because I didn't think the technology was in place for a solo dev or small team to pull off alone.

But last December, I saw the stars (finally) aligning to where it might be possible. So that, along with a mindset of giving VirtualHostX one final big push forward in 2020, I decided that 2021 could be my chance to build something new that sets me up for my next decade of work.

I just needed to spend 2020 figuring out how all the pieces fit together.

And so, with 2020 wrapping up around the same time as the first anniversary for my yearly subscription customers, it seemed like the right time to run some numbers and share them.

My apps have different target audiences. Three are for web developers and designers; another is a financial app for consumers, plus a few small macOS utilities. So the numbers below are in no way an apples-to-apples comparison. But they're informative to me, and maybe you, too.

The first new thing I made in 2020 was Rebudget. It's an app to help forecast your budget - not explicitly track every transaction.

It's also the only Mac app I've had in the Mac App Store in a long time. (For reasons.) And coming fresh off offering my first subscription-based app with all that infrastructure in place, I wanted to try a variation of subscriptions again.

Here's what I settled on for licensing.

Purchase directly from my website (like all my other software) or the Mac App Store. Both versions are free to use forever, but with a select group of Pro features behind a paywall.

That paywall being either 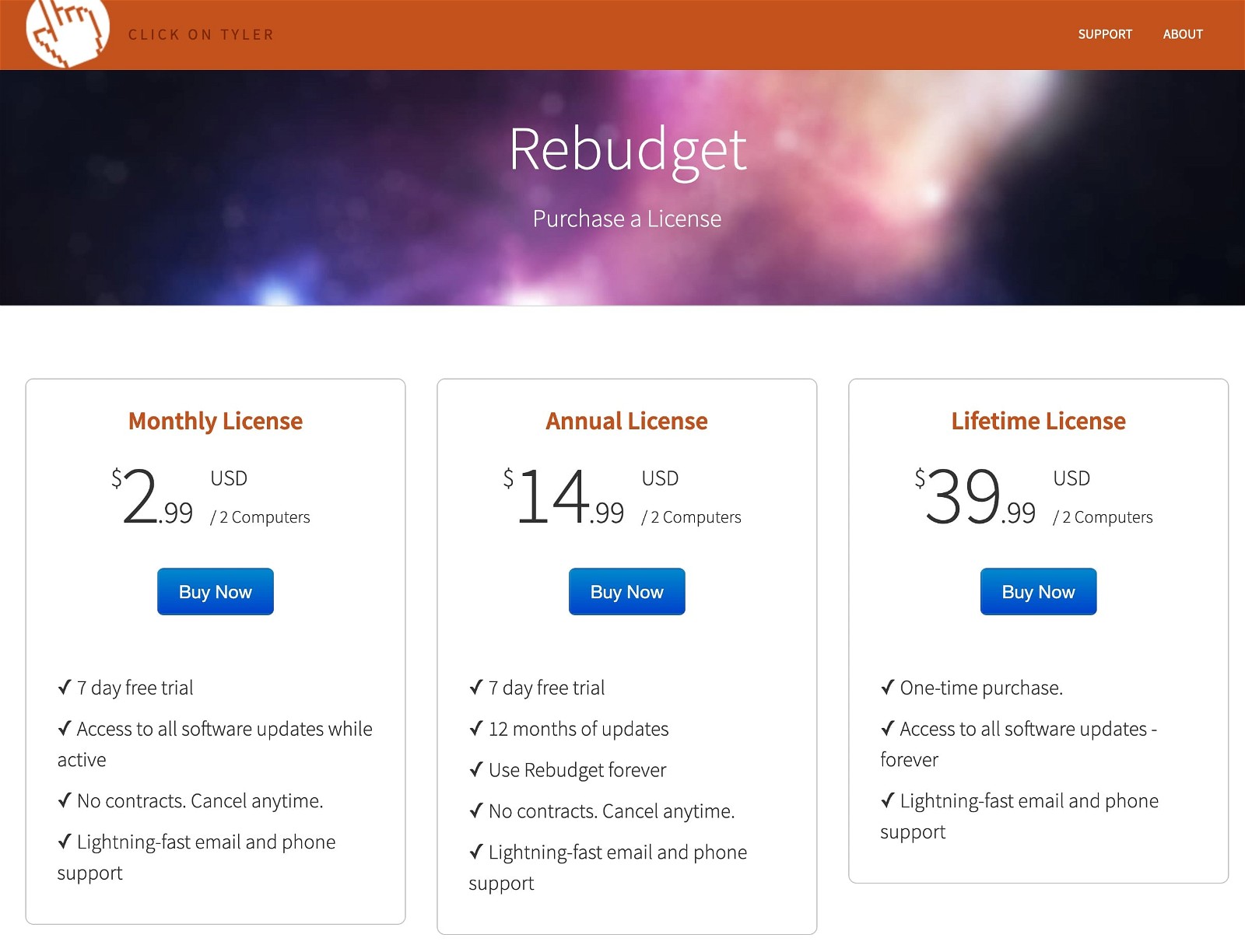 I had the code ready to offer subscriptions and direct-sales from my website, but the Mac App Store was a giant missing piece. Fortunately, RevenueCat to the rescue. I wrote a small utility class that wrapped StoreKit and my own backend's APIs, so with a single build flag I could produce a version targeting either storefront. (I should go into detail sometime about how I integrated RevenueCat's SDK with my own stuff ?)

So, how did the seven pricing options fair?

In April, I released Ears - a super-fast audio switching utility for Mac.

Ears is shareware. All features are free to use forever, but you'll see a nag screen asking you to purchase each time you launch the app.

If you do decide to purchase, I offer a sort-of-name-your-own-price approach. 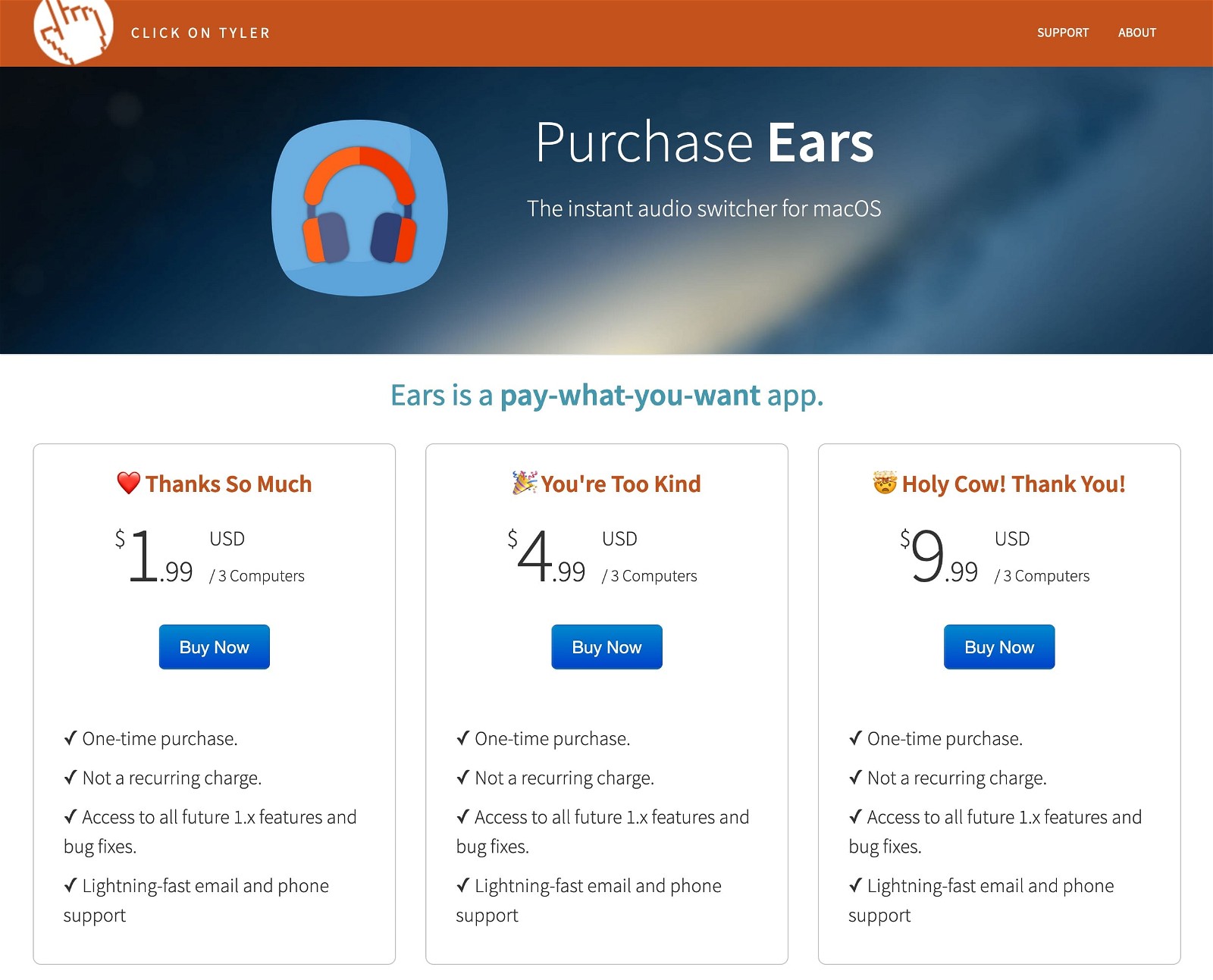 No payment is required to use the app or pick from three price points that all deliver the same thing as paying nothing.

Next up is my little Spotify menubar utility, Spotish. I purposely didn't make this app for sale "officially" because when I decided to release it on a whim, I was too lazy to make my own app icon, so I just used the official Spotify icon, turned it purple, and rotated it upside-down. I wasn't about to submit that to the App Store or even put on my business website. I kept meaning to fix it, but here we are nine months later ????

Spotish is pay-what-you-want on Gumroad and promoted nowhere else than an old blog post and my personal website's footer. I should advertise it more because I really do find it helpful. Anyway...

CommandQ is another Mac utility app that I first released way back in 2011, didn't update for seven years, and then did a 2.0 rewrite on my birthday last year.

Surprisingly, CommandQ has always sold very well. It's not making me rich, but it is consistent. And for reasons I've never figured out, I have tons and tons of customers from Korea.

I submitted it to the Mac App Store in 2011, but App Review rejected it because it "modified system behavior" and might confuse users ? So, it's lived on my website for nine years. I hope Apple is doing OK without my 30%.

CommandQ is a traditional app. A two-week free trial and then a one-time payment of $9.99.

VirtualHostX is $49 for twelve months of updates with an automatically renewing subscription. If you cancel your subscription, you can use the last version released during your 1-year window forever, but you don't get new updates.

Or customers can choose a monthly subscription for $5, but the app will stop working entirely if your subscription lapses. 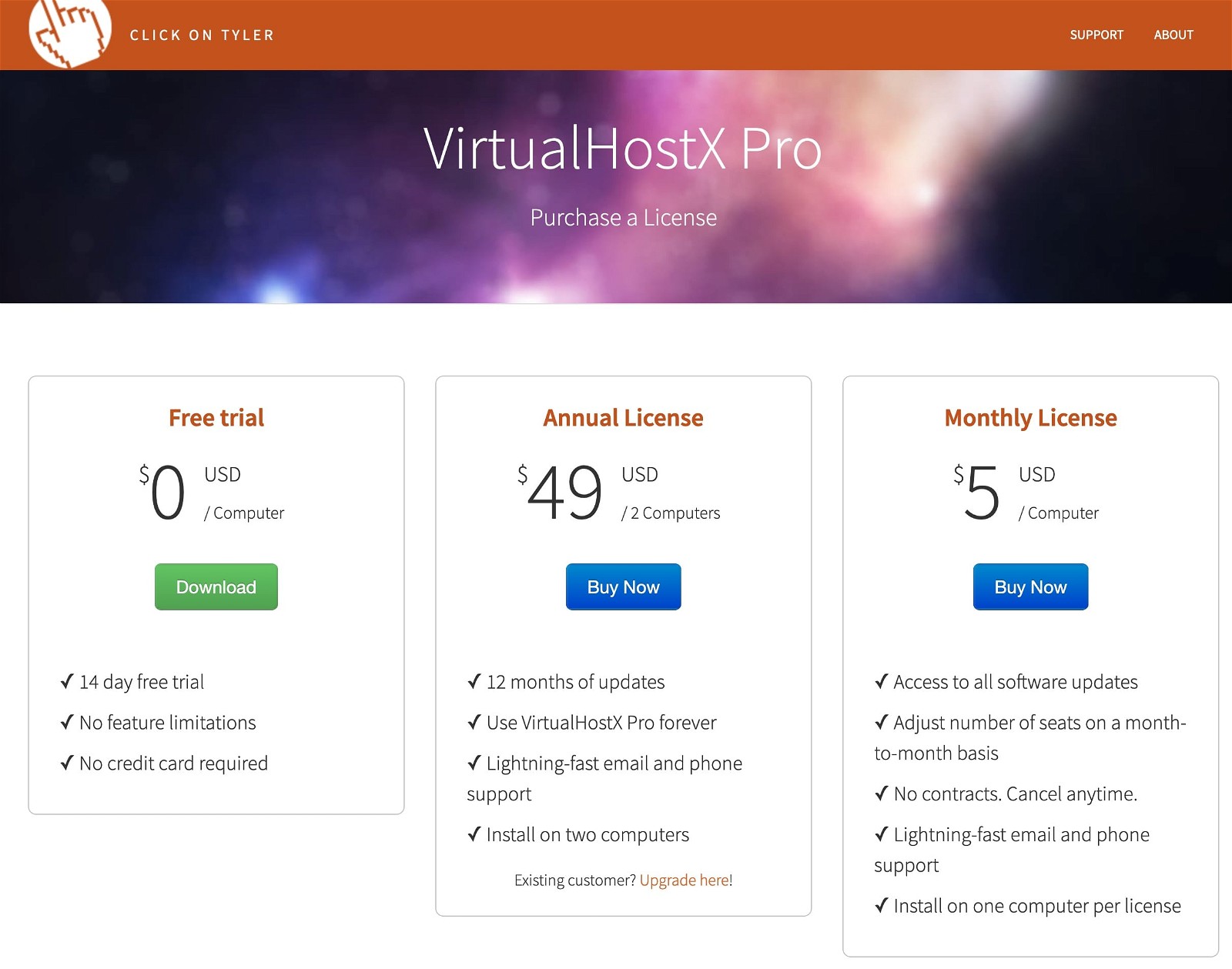 (As of May, you can also use VHX as part of your Setapp subscription.)

I'm now a little over a week into the first batch of annual customer renewals - and about two weeks since the first reminder emails were sent. I'm seeing an 8% churn rate, which is way better than I was expecting.

I'm not sure. I hope you weren't expecting some perfect conclusion. None of the above apps are entirely analogous to what a friend and I are working on. But they are informing our decisions.

Price-wise, VirtualHostX is the closest, as we're thinking somewhere between $29 and $69 for a year of updates. No monthly option for the app itself, but there's a possibility of an inexpensive, related web service to go along with the app that could be an additional monthly or yearly fee.

The last few years have been rough as software continues to be devalued further and / or given away as a loss-leader. On the other hand, despite all my bitching and griping on Twitter, I do think the Mac continues to have a vibrant future - even if I don't agree with many of the software decisions Apple is making.

I've seen the winds changing direction for my three web development apps over the last few years. I'm willing to keep pushing forward with VirtualHostX, but its time is limited, I'm afraid.

I love the Mac platform and its ecosystem. I'd take a PC running macOS over Apple hardware running any other operating system any day of the week. Mostly because of the wealth of third-party software. So it'll take a lot to pull me away from macOS and thus writing software for it. Until that happens, I need to figure out a profitable way forward under the new rules.