In this post I thought I'd share my history maintaining mailing lists for my products, how I make the most of them, and what sort of success they have and haven't brought me. Near the bottom, I'm also going to share some real data about my open rates, etc.

To begin with, it took me a long time to become comfortable adding customers to a mailing list. I always worried I'd bother them when I sent an email. But over the past four years, as I've seen my open rates stabilize around 70%, I've gotten over my fear and come to understand that a healthy mailing list is the best way to communicate with my users and an amazing sales tool.

During the first three years running my company and selling my apps, I never bothered maintaining a mailing list. I wrongly assumed that 1) I had nothing to say and 2) that my users wouldn't be interested. It wasn't until I read a book on marketing for software developers that I finally got past my fears and setup my first email list.

The first step in setting up your own mailing list is choosing an email provider. After looking around at a few different companies, signing up for test accounts and exploring what they had to offer, I chose to go with MailChimp almost based on their reputation alone. I'm happy to report, four years later, I'm completely satisfied.

They offer all the features you'd expect: fair prices, pre-made templates or design your own, full control over your email HTML source, excellent tracking and reporting, integration with Google Analytics, and my favorite feature, Time Warp - it lets you send an email that hits your customers' inbox at their local time. It's an outstanding feature that I use to deliver emails at 9am local time no matter where my customer lives.

Because I was so timid about initially setting up an email list, I've gone through a number of different ways of capturing customer's emails.

Before I talk about the different methods I've gone with, let me address one obvious way of going about it that I avoided. At the time I decided to setup a mailing list, I already had the email of every customer who ever purchased from me. Their email is not only tied to their software license, but it's how I deliver their purchase information. There's nothing stopping me from taking all those thousands of addresses and adding them to my list. The problem with that, is that those customers never opted-in to receive mailings from me. I'm sure some of them wouldn't mind if I sent an occasional newsletter, but it's not something they explicitly signed up for and a marketing newsletter is not worth violating their trust.

The one exception to that rule is if something earth shattering happened to me, my company, or my app. There could be a legitimate reason to contact everyone. In the seven years I've been running my company, that has only happened once. It was when my licensing scheme was cracked and I needed to email everyone a new license.

However, rather than sending out a mass email, I chose to issue an app update that would display a message about the situation when first launched. Sure, that took more work, but I felt better knowing I'd only be reaching customers who were still actively using the app.

All that said, let me reiterate how important it is not to violate your customers' trust. It's in your best interests to keep up a great relationship between you and them. Pissing them off with an unsolicited email could very well lead to fewer sales when it comes time to upgrade. It's just not worth it.

With that out of the way, how do you add customers to your mailing list? Like I said above, I've tried a number of different techniques.

In 2010, I issued an app update that added a new menu item to my app which simply said "Subscribe to the VirtualHostX Mailing List". Over the six months that feature was initially live, I had practically zero sign-ups. Less than fifty to be sure. Not only was the feature buried and out of the way, but there was no explanation of why joining the email list would be beneficial to the user. I've continued to leave that feature in the app, just in case, but I've moved on to better acquisition methods.

Next up, in 2011 when I was preparing for my third major app update, I pushed out an update to the current version that showed a window with a message saying "VirtualHostX 3.0 is coming soon! Be the first to know when by joining our email list." Beneath the message was a sign up field. The user could subscribe right from within the app - no need to open a web page, etc.

That strategy worked quite well. Every user saw the message and they were given a clear (but, admittedly, not very compelling) reason to sign up. By the time I was ready to release my major app update, I had a list of a few thousand users within a few weeks.

A year or so later, I moved on to more tried and true ways of collecting email addresses. I added an extra field to my order form encouraging users to sign up for the mailing list at the time of purchase. It was just a simple checkbox with a message reading

Join our newsletter? You'll receive 2-3 emails per year. And we never share your email with anyone else.

That checkbox lead to a 40% conversion rate. I was quite please but wanted to do better.

I knew the next logic step would be to have the checkbox already selected by default. I went back and forth for a long time over that decision, as it does bother me a little bit when other companies do the same thing to me. But in the end, I went with it - rationalizing that it's just one click to opt-out and it's clearly marked.

Over the next year I saw my subscribe rate jump to 85% and I've never received a complaint. I call that a success.

So that's how I've been acquiring the emails of my customers. I guard that list like gold as it's an amazing sales tool whenever I release a new, paid upgrade. But it still didn't account for another type of user - prospects. I had no way of reaching out to potential customers who had downloaded the app but not yet purchased.

To reach these customers, I changed how my software's download page worked. Previously, https://clickontyler.com/virtualhostx/download/ was a direct download of my app. Click the link, and the zip file would start downloading.

I decided I wanted to collect email addresses when users downloaded the app. I've seen some companies require an email address to unlock the download, but I wasn't ready to go that far. As a user, I hate that. Instead, I changed my download page to be an in-your-face email signup form. Go there and see for yourself. Rather than being a blind download, it's a signup form that initiates the download via JavaScript. This gives the user what they want, but still allows me to show the messaging of my choice.

I've seen sign-up rates of 40% this way. I attribute that success to the clear benefits I offer the potential customer.

MailChimp makes it super easy to setup an email course for your users. For my list, an hour after they sign-up, MailChimp sends them a welcome and getting started email that walks the user through the basic setup steps and offers various way to contact me and get help. Then, a week later for the next three weeks, MailChimp sends an email discussing one of the app's major features and how to use it.

The timing of the emails correspond with the length of the user's free trial period. However, I am looking into speeding up how often the emails are sent. I'm worried a week between emails may lead to too many users forgetting about the app. Maybe a day between emails instead? I'm not sure.

I'm very respectful of my customers' time. I try my best to only send emails I think they'll genuinely enjoy or find useful. So far, that's led to me sending at most three emails per year. I of course send out an email whenever I release a major new update, but I've also sent a few to solicit feedback about new features I'm working on.

This year, when I released version 5.0 of VirtualHostX, I tried something different and sent out a teaser email a few days in advance of the release to prime everyone's interest in the release. That led to some buzz on Twitter and, what I believe, was a stronger sales explosion on release day.

Here are the most recent campaigns I've sent along with the open rates I saw, from the newest email to oldest.

As you can see, my open rates hover around 70% with a 20% click through. That's way above the industry average of 18.3% and 2.5%. I think my success can be attributed to sending a few, highly important emails only to customers who have explicitly opted-in.

So, clearly those open rates are great. But does maintaining a mailing list really contribute to higher sales? Absolutely! Take a look at the chart below. 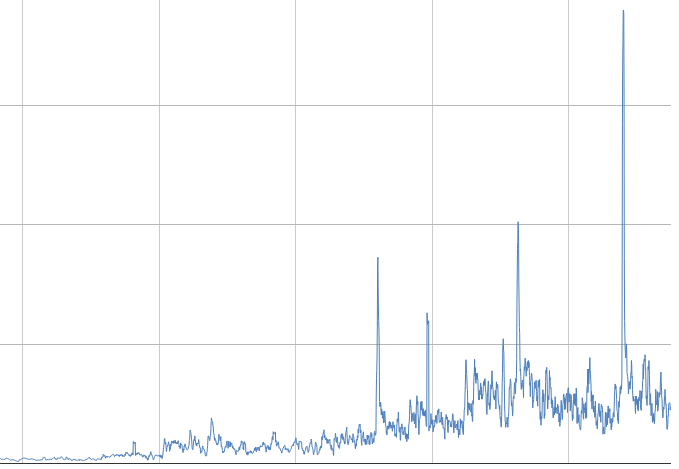 That's a graph showing my sales per day on a rolling seven day basis. The spikes you see are major new releases of my apps. Without a mailing list, I would have no way of communicating with my customers about the new release. The best I could do would be to write a new blog entry, post to Twitter, and hope and wait for customers to discover it on their own.

I can't overstate how important my mailing list is to my business. I literally wouldn't be able to make my yearly goals without the guaranteed spike in sales a targeted email blast brings in.

If there are any other questions I can answer, or any other data you'd like me to share on the topic, feel free to get in touch or post in the comments below.