An online friend emailed me after reading my previous standing desk post with a few questions about the monitor pictured on my office desk. 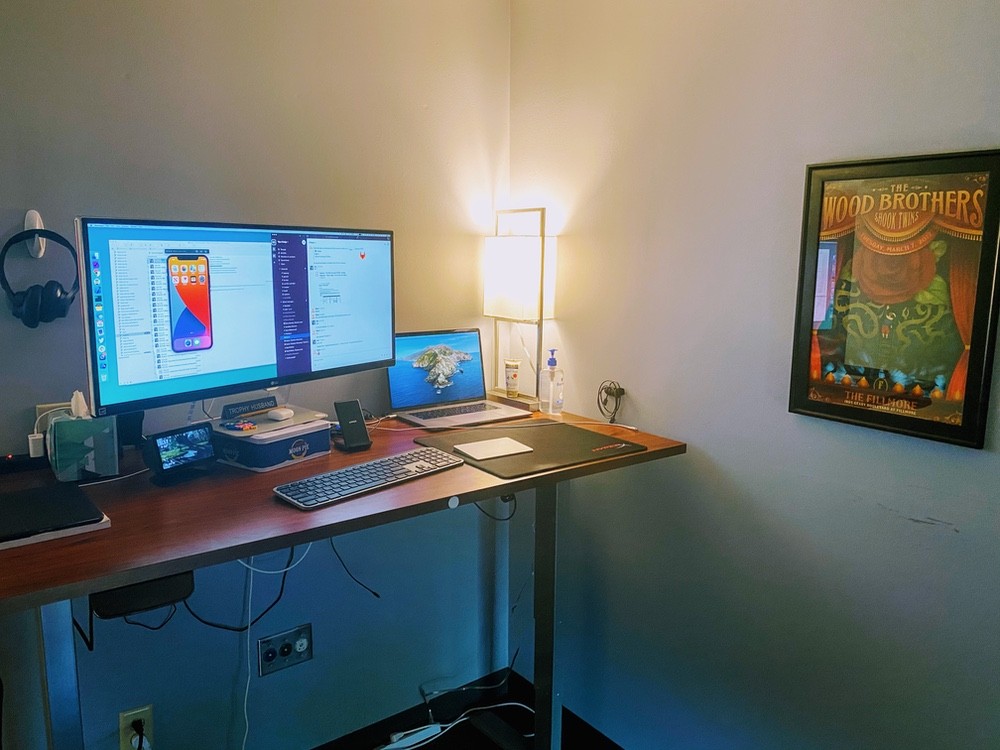 My reply kept getting longer and longer (go figure) until I decided I might as well publish it here in case anyone else finds it interesting. Without further ado, here's another 869 words about ultrawide and multiple monitor setups.

Read your post about your home office setup. I think I'll get a standing desk in 2021 as well for a change. Since the gyms are closed, my body missed lifting heavier weights and I can feel it already at my juvenile age of XX 🙂

Friends of mine are totally curious about the "terrain mat" thingie you have. I'll get one for my girlfriend as well. Sounds sensible, and I never heard anyone recommend something like that before. Cool stuff!

I noticed on one of your pic, I think from your office desk, that there's a raised Ultrawide monitor. I believe that's an LG 34" from the 2014s or so? I think I kind of recognize the stand from a YouTube video.

Can you say anything about that one? I spent some end-of-year surplus money from my business on a keyboard, NAS, and monitor -- and the monitor is an LG 34" ultrawide from 2019, and I cannot make heads or tails of it.

It's nice to have space, but I'm mostly just using the middle portion, because the left and right edge are so far away. My effective space boils down to 27" at 1440p, more or less. Then again, during NAS setup, it was nice to be able to prop 2 Firefox windows next to another. But that's not the norm. The norm is central focus for writing and coding in a single window.

It's a truly odd thing, and nobody reviews monitors except for gaming or cutting YouTube videos, it seems. Which makes sense, because reviewers are working on YT content a lot, and writers and coders are less prominent on YT 🙂

Would love to hear your thoughts on that thing!

And my turn to prattle on...

Sorry for the delay in replying!

I'm envious you got that far. I'm 38, but at the spritely age of 26 I started strength training, and of course did it completely wrong and tore my rotator cuff. Haven't lifted any weights since then 🙂

Friends of mine are totally curious about the "terrain mat" thingie you have.

It was a new thing to me as well when I came across it online. Like I said in the post, I had a (looking back) crappy standing mat years ago. And I have memories of my aunt having a very nice and cushy rubber mat of some type in her kitchen when she stood to cook. But the terrain one was new. I change shoes and sock feet through out the day, but I'm always on the mat. Never on the floor itself - or even the area rug I have at home. It's great!

Any time I've had multiple monitors, I've never treated the pair as equals. It's always been one primary monitor positioned in front of me like a single screen setup, and then the second one off to the side and used purely as a sort of auxiliary screen. My active documents/work/focus/whatever stay on the first screen, but then email, chat, music, and reference material on the second.

I bought that ultra wide in 2015 when my daughter was born and I gave up my office to turn into her nursery and moved my Ikea desk into a hallway closet (not joking). I wanted more screen space, but didn't physically have room for another full monitor.

I had no idea ultrawides were a thing until (now defunct) @justin tweeted about one.

Anyway, since then it's been a mix of that one, and then to an iMac Pro, and then the ultra wide again at my office desk.

When on the larger one, even though it's one screen, I still use with it with the same primary/auxillary mindset. I have a few Keyboard Maestro shortcuts that position windows for me. I wrote about all of those shortcuts here.

A few shorcuts will position my windows into the four screen quadrants (corners). But the three I used the most are "left half", "right half" and "centered standard width".

The stuff I'm focused on that would be on my main monitor I'll macro to a good sized width (but not the full width of the screen), maximum vertical height, and centered. And then reference material, email, slack, etc. go into either a corner or a screen half. (iTerm2 is the lower right corner - always.)

I think in my mind that provides some sort of psychological separation between my windows/apps the same as a dual monitor setup used to offer. Occasionally I will focus on two side-by-side half-screen windows. Like two Xcode projects or a Zoom screen share next to my note taking app.

(Speaking of which, the last time we spoke I mentioned my idea of a combined note taking / task app I think. It got pretty far by reusing some old code, and I now use it as my daily driver. Not sure if I'll ever release it. But, if you're curious, you can poke around at some screenshots and features here.)

It's nice to have space, but I'm mostly just using the middle portion, because the left and right edge are so far away.

Getting to the rest of your comments now that I've rambled on. You're exactly right. The middle of the monitor is my primary focus and where my most important windows go. Full screen is just insane at that size. And then "far away" windows on the halves or corners aren't too bad because those are just secondary windows.

Anyway, I'll end by saying your email has great timing. A few days ago I finally gave in and purchased this portable monitor.

I certainly don't need it - and I'm not even sure if it'll turn out to be crap or even helpful. But now that I've got this nice, big standing desk that has quite a bit more desktop than my previous desk, I have this sort of dead space to the right of my iMac in front of my lamp and that external drive array. It's too small for a real second monitor. I had no idea "gaming monitors" or "portable monitors" were a thing until I happened across this one. But it's 1920 x 1080, will fit nicely into the space, and should plug straight into my iMac with USB-C. Thought it might be fun to try having a true auxiliary monitor again. I tried a few times since Catalina with my iPad's Sidecar mode, but it was always awful and wonky - causing my Mac to go black and stutter while the iPad initialized its screen.

Hope the above is helpful or at least interesting. In hindsight, it should have been a followup blog post 🙂