Last month, my 9-5 job was kind enough to gift me an iPad Pro and its new keyboard. I've had a few iPads in the past, but they've always ended up stashed away, unused, in a drawer somewhere. I simply never got hooked on their utility. I never found that killer app, which, for me, would be the ability to code anywhere. This Pro model, however, has changed all of that.

I've always had two Macs. One to take places and another to get "real work" done. In the past that meant a spec'd out iMac and an 11" MacBook Air. More recently, it's been a work-issued 15" MacBook Pro that stays plugged into my cinema display 99% of the time and a MacBook (One) when I travel. The new MacBook is certainly the most portable Mac I've ever owned, but it's slow and lacks the screen space to do any UI intensive work.

Now that I have an iPad Pro, I've sold my MacBook and only touch my MacBook Pro when I have serious work to do. The iPad has replaced nearly everything I use my laptop for. That may not be so unbelievable. Lots of folks like Viticci have moved to an iOS only way of life. As I do more and more tasks on my phone, I've been tempted to try going iOS primarily, but I could never make that jump because I code for a living.

I was screen sharing from my iPad to another machine on my local network, when it dawned on me how great it could be if this particular Mac were always available to me - even from outside my house. So, I splurged and ordered a datacenter-hosted Mac Mini from MacStadium. Ten minutes later I was connected to my new Mac in the cloud. And ten minutes after that, I had Xcode open and started testing the waters.

I'm using Screens.app to connect. And with a good internet connection there's virtually no lag when screen sharing with my new Mac Mini. I'm able to run a native Mac resolution of 1920x1200 on my iPad in full screen. That gives me plenty of room to run Xcode and the iOS Simulator. With Apple's new external keyboard, all of my usual Xcode and OS X keyboard shortcuts work just fine. And since coding is primarily a keyboard driven activity, my arm doesn't get tired from reaching out and touching the screen like a designer's might.

All in all I'm thrilled with my new setup. It gives me the simplicity and benefits of iOS, while still allowing me to do real work outside of the house or from the couch. 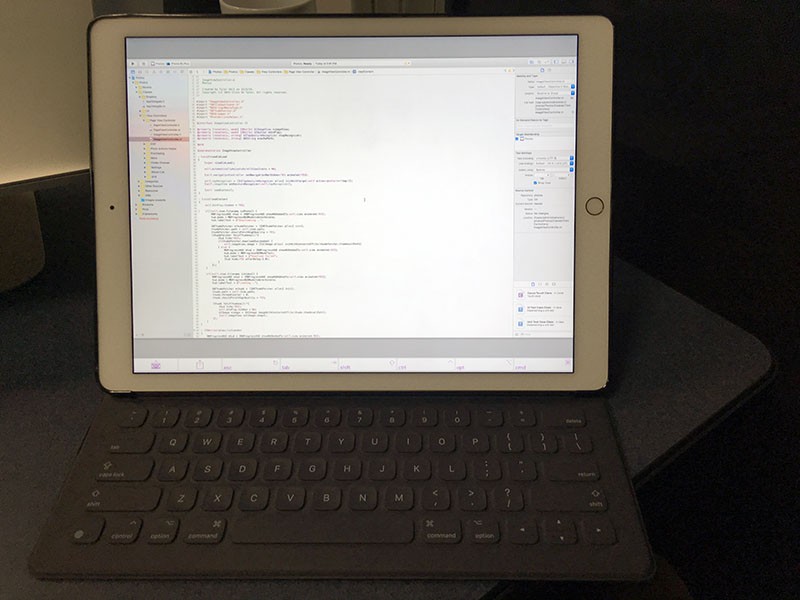