Before I get to my point, let's do some math.

The first digital music purchase I ever made was Eric Clapton's Me and Mr. Johnson in April 2004 from iTunes. Since then, (I just looked this up) I've bought an additional 3,245 songs from Apple.

I couldn't find a quick way to count how many of those came bundled as albums, or, more interestingly, the total cost of all that music. So let's just ballpark it between $2,500 and $3,000 in music.

I subscribed to iTunes Match as soon as it debuted in 2011. I think that's what? $25 a year? The nine years since then works out to an additional $225 for Apple.

And while figuring out those dates, I came across this gem from July 14, 2011 in my email archives:

Yes, that's a Google Buzz email notification about a tweet I posted saying:

Cancelled my @spotify membership after 24 hours. Nice product, but lacks discovery. Heading back to @rdio.

Again, searching my email archives, I found that I joined Pandora in July 2008 - back when the welcome email was still addressed from Tim. 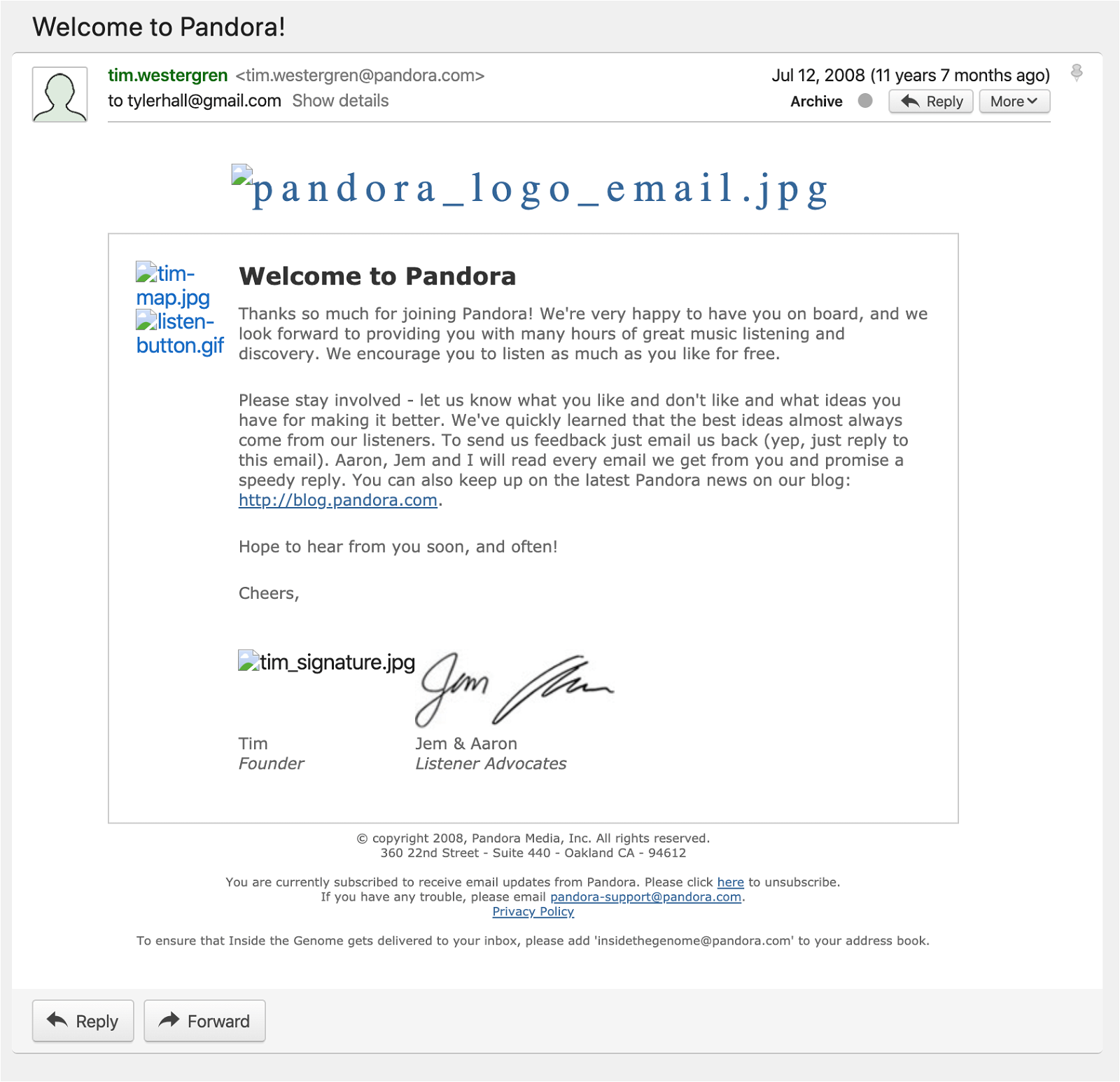 I couldn't determine the exact date I first became a paying customer, but I know I've been one continuously since at least sometime prior to mid-2012, which is the first record I have of my paid Pandora subscription renewing. Five bucks a month times ninety-two months is $460.

Once Rdio got acquired by Pandora and shut down, I switched to Apple Music. For a while I just paid $10/month for myself. But during the last few years it's been a family play for $15/month. Regardless, let's take the cheaper option and assume $10/month since December 2015: that comes out to a cool $500.

All of the above was paid to the giants of the industry. I have no idea how much more I've spent on one-off purchases to indie bands and labels that were more than happy to accept a few bucks via their website in exchange for a zip file of mp3s. Or the various live concert vaults I've subscribed to occasionally.

I don't have the foggiest clue where that amount of money places me as a music customer. Surely not the low end of consumers? But I doubt the high side either. I'm guessing I'm somewhere in the upper-middle compared to what most digital natives have spent on music.

But my point is this.

I happily and enthusiastically paid for all that music. But now? Every time I see the $14.99 charge for our Apple Music family plan hit my checking account, I wince. I pay it begrudgingly because I feel like I have no other choice.

Let me be 100% crystal clear about this. The only reason I subscribe to Apple Music over Spotify or Tidal - or, hell, - Amazon Music or god-knows-what thing YouTube is currently offering, is because it's the first-party, default service on macOS and iOS. The friction to use any other app that competes with a pre-installed, first party app on iOS (and increasingly macOS) is just too damn high. After a while I end up feeling beat down by a thousand UX papercuts and submit myself back to Apple Music and Safari and Mail.

Pretty much every six months, like clockwork, I re-activate my old Spotify account, pay for a month, and give them another try. And I'm not just starting from scratch with a blank library. Each time I try again I pay Soundiiz to import all of my Apple music (note the lowercase "m" because I'm talking about my purchased iTunes music, ripped mp3s, and saved Apple Music playlists) into Spotify. That way I can be sure to feel at home and that their recommendation engines have enough to work with.

And it's great. In most places the Spotify iOS and Mac/web apps are so much nicer and easier to navigate and grok. I almost never find myself waiting an eternity like I do just for the Apple Music home screen to change from an empty, white screen to a slightly-less-empty, white page filled with blank album placeholder images, to finally a UI I can actually use. And I never have those moments where I'm on a cell network and Apple Music just. Never. Starts. Playing. Spotify is almost without fail fast and responsive. Even using the Plex iOS app while driving to listen to music hosted on my iMac via my home Comcast connection is way more reliable than Apple Music coming from their cloud. (Random: Like listening to music? Like how awesome Plex is? Definitely check out Prism.)

And while I love the idea of Apple's human-centric approach to playlist curation, it just doesn't work in practice. Spotify gives me vastly more and better recommendations for new and related music. Like my beloved Rdio of years gone by, Spotify is just far superior to Apple for discovery.

So, if Spotify is easier to use, is (arguably) designed better, performs better, is more responsive, and surfaces better content, why am I paying for Apple Music?

Like I said, it's because Apple Music is the default.

When I use Spotify, it doesn't matter whether I last opened the app two weeks ago or whether I backgrounded it two minutes ago while walking out the door. As soon as my phone connects to my car's bluetooth, what happens? Ha. Why even bother writing this? We all know. Apple's Music.app takes over and starts playing. Oh, and can we pause to admire how Music.app still can't pick up from where it left off? In the best case it starts back at the beginning of the song that was last playing. In the more likely case it starts with the alphabetically first song in my library. Which means I've heard the opening whistle of Ace of Base's All That She Wants roughly two-and-a-half million times. (Oh the irony. Just now as I googled for a link to that song, YouTube showed me this ad.)

Or how about if you ask Siri to play a song and don't specifically say "...using Spotify" it goes straight to Apple Music even if you're not a subscriber?

Initially, there were no 3rd party apps on iOS so of course Mail and Safari were the defaults. But then we got the App Store and suddenly there were tons of 3rd party mail clients and web browsers.

But we couldn't set those to be the default on iOS because Apple warned that users might get confused or tricked into setting a default choice against their will. (I guess that's why they now show a notification prompting desktop users to use Safari the first time they launch Chrome? Ok, Apple.)

I wish I could find the quote I'm thinking about. I honestly can't remember if it actually came from Apple on-stage at the iOS 7 reveal or if it was just repeated a bunch by pundits, but the idea was that pre-iOS 7 everyone was still getting used to mobile software. But with the big redesign (The Great White Flattening?), "the trailing wheels are coming off". It could now be assumed that users know how this stuff works and should be trusted and given more powerful options. At that time I thought, finally, maybe we'll be able to set a new default mail client.

But, no. Apple pivoted to banging the drum of Privacy. And I get it. If everyone just willy-nilly installed the Gmail app without thinking, and if Apple made it easy to use the Gmail app on iOS instead of artificially crippling it and essentially forcing people to their first-party Mail app, Google could probably vacuum up even more of our personal data. (Slightly related: remember how long the original Google Voice iOS app sat in review?)

But now? Now when you see that decision standing alongside the rise of heavy-handed, in-your-face, dark-patterned, growth-at-all-costs, rise of Apple services? How can anyone not be cynical and assume these restrictions are anything less than yet another push to squeeze an additional monthly penny out of customers?

It all just leaves a bad taste in my mouth. From the ban on default apps, to the constant Apple Card promotions, the Apple News push notifications, pretty much everything they've released in the last few years. It just feels fucking desperate and greedy. I'm completely paraphrasing comments I've read elsewhere made by people smarter than myself, but the Apple of old used to earn our money by creating products we loved. Now it feels like they take our money by locking us into services we have no choice but to use.

And back to the original topic and title of this post: I now give Apple my money begrudgingly. It pains me. And, god help us, with today's news about Apple cutting sales expectations because of the coronavirus, I can't even begin to imagine what the growth hackers at Cupertino are going to rain down upon us next.

Remember standing in line at midnight to literally pay $129 for Jaguar? Or in 2007 for the iPhone launch? There could be no more literal embodiment of the Futurama SHUT UP AND TAKE MY MONEY meme than the way I felt at those and many other Apple community events. It was a momentously joyful whirlwind of nerdery and consumerism run amok in truly the best way possible.

I know this post meandered all over and was not as well backed up and supported as it should be given the claims I'm making and the level of vitriol I'm spewing. (I'm typing this in a dark bedroom waiting for my four year-old to finally fall asleep.) So, instead, let me just refer you to Michael Tsai's website - who is basically the Apple dev community's lead champion at assimilating all the disparate opinions on whatever news story or technical tidbit currently has us in a frenzy. He collects the facts and puts them together way better and without all the emotional garbage that I inject into everything.