My wife and I were living in California in 2008 - most of our family back in Tennessee. I arrived home after work one day, and she said, "Your mom called me. She told me not to tell you anything, but we need to talk."

My grandmother was 84 at the time and had been forgetting things for a few years. Those lapses in memory or the occasional odd behavior led to doctor visits. Which led to specialists. And then, a week before my mom's phone call to my wife, an official diagnosis of Alzheimer's.

From my mother's perspective, this diagnosis - this disease - was shameful and needed to be hidden. As much as we eventually fought over her not telling my grandmother, and as much as I don't think I'll ever forgive the final decision never to tell, I can understand that it wasn't just her. That entire generation viewed anything related to mental health as a stigma. And whether or not the affected person was her mother or her son, the stigma remained and was not to be discussed.

My mom's intentions were to tell no one - not me, my sister, family friends, not even my grandmother herself.

(The doctor didn't tell my grandmother either. Why a physician would deliver a diagnosis like this to the child of the patient and not the patient themselves is unconscionable and borderline malpractice, in my opinion.)

So why did she call my wife to share the news at all? Because at the time, my wife worked for the Northern California chapter of the Alzheimer's Association. And when something like this becomes real, it becomes real, really fast. You need help. To cope, to plan, to prepare. You need advice on the next steps and the myriad of medical decisions suddenly just over the horizon.

And that's exactly what the amazing people at the Alzheimer's Association are for. In addition to advocating for and advancing the medical science of this disease, they are there to provide support and guidance for the families and caretakers of people living with Alzheimer's.

Situations like these are never easy on the person's family - no matter the medical condition. But Alzheimer's is particularly vile because at some point, the person living with this disease...disappears. And other than the occasional fleeting glimpse of their old selves, the person that family loved and now has to take care of, is gone. It's fucking cruel to witness the story play out over the remaining years. In my grandmother's case, it took eleven.

My grandmother passed away in August of 2019 at ninety-five years young. Why am I writing this post now? Two years later? Before I get to that, let me tell you about her.

Her name was Bettye. This is her. 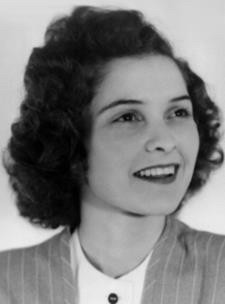 This is also her. (She's the one climbing the wall.) 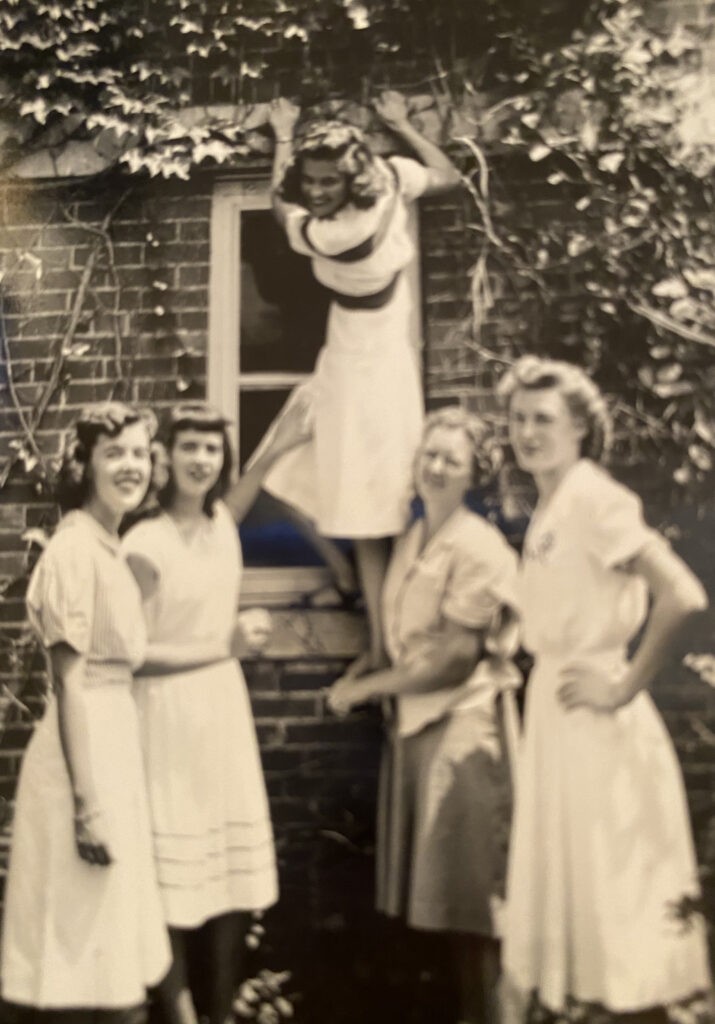 This is the first time she met my son. 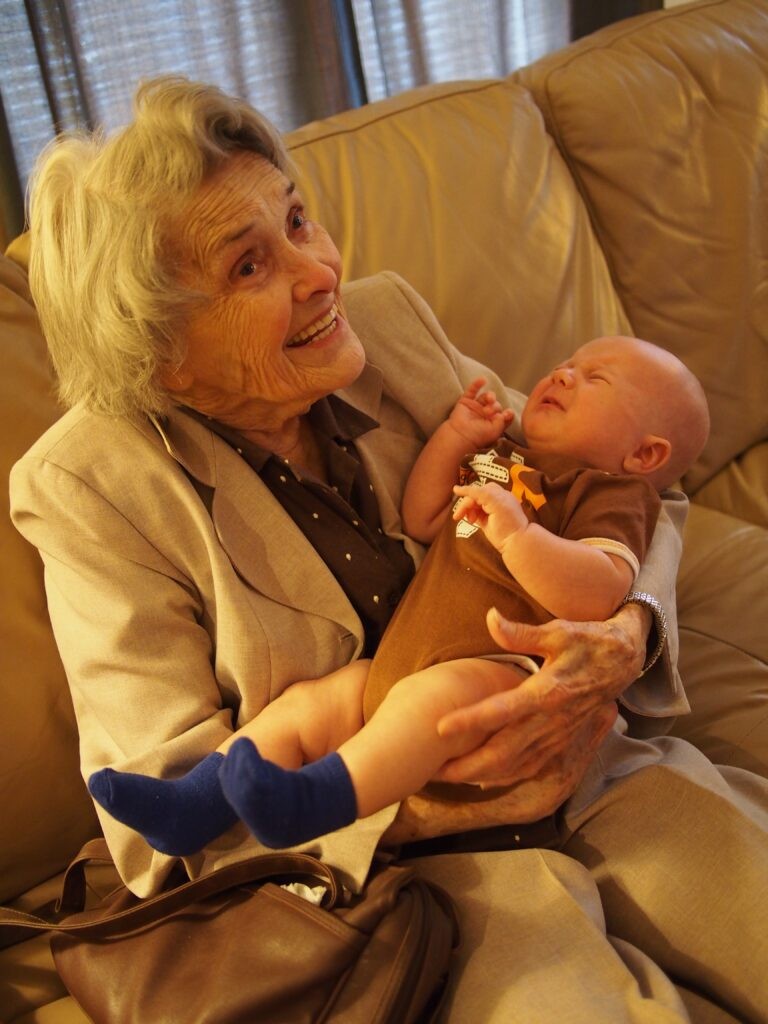 And this was the last time she met him. And goddam if her eyes didn't light up when he walked in the room - even if she couldn't remember his name any longer. 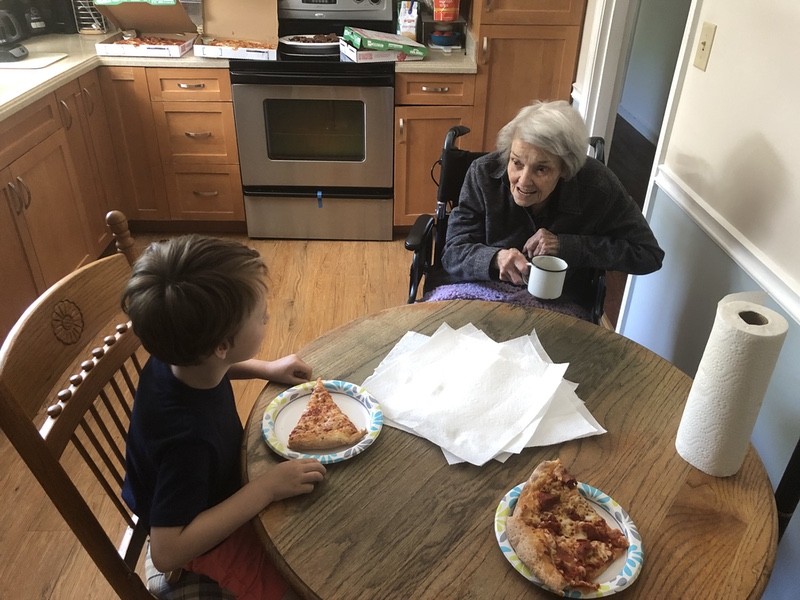 This is a video of her using an iPad for the first time. As she swiped through those photos and intuitively, without anyone teaching her, pinched to zoom in, she out-of-the-blue remarked

You know that man in California invented this. He made all these things himself. Can you believe that?

And these were her dance moves.

She joyfully and fearlessly lived through more tragedies than I care to think about and had a wicked collection of one-liners that could knock you backward out of your shoes. When Trump was elected, she never once spoke his name — only referring to him as "That Man."

My brother-in-law was the first of her grandkids to disappear, which made sense because he was the last to join the family. She never forgot my name or my sister's. But near the end, you could hear the uncertainty and delay around my wife's.

I don't know how much she understood about herself, but the most challenging part wasn't the end for me. It was the middle years when it was evident in her eyes that she still knew enough to know something was wrong inside her brain but didn't know what or why. I can only imagine the panic she must have felt.

I said goodbye to her three years before her death. I had emotionally accepted that the person I loved was no longer there. That didn't mean I stopped caring, or visiting, or checking in. Or letting my kids, her great-grandchildren, develop their own relationships and memories with her while they could in their short time together.

But it did mean that when I woke up at 6 am to the news of her passing in a text message from my mother - after a weeks-long agonizing final decline - I was at peace as much as I hoped she was. 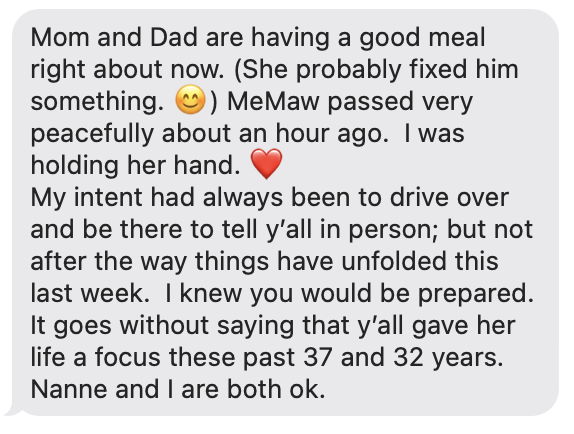 She lived a difficult life, and yet met it with such apparent gratitude. She deserved much better than the way it ended.

But back to the reason for this blog post. I write about my grandmother this evening because my wife is working for the Alzheimer's Association again - an organization that she loves and is dear to our family. This time, here in Tennessee.

She, her coworkers, and everyone at the association work tirelessly to one day see a world without this disease. It's not an impossible goal at all. The first survivor of Alzheimer's is likely out there right now - growing up.

Next week our families are walking in memory of my grandmother to raise awareness and maybe even a little money to support Alzheimer's care, research, and advocacy. It's a worthy cause, and I would be incredibly grateful if you'd consider donating.

Love you, Memaw. This much.